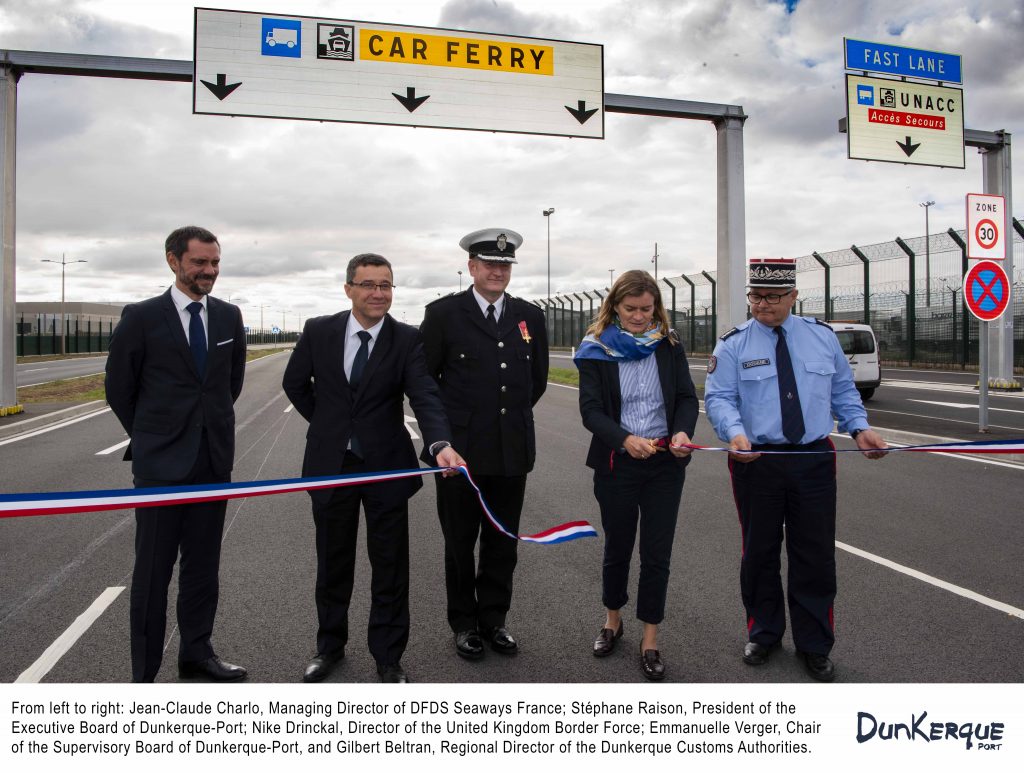 On Thursday, September 19th, the secure access corridor for heavy goods vehicle at the Dunkerque-Port Cross-Channel Terminal was inaugurated in the presence of Emmanuelle Verger and Stéphane Raison, respectively Chair of the Supervisory Board and President of the Dunkerque-Port Executive Board, Gilbert Beltran, Regional Director of the French Customs Authorities, Jean-Claude Charlo, Managing Director of DFDS Seaways France and Nike Drinckal, Director of the United Kingdom Border Force.

The new facility reinforces the safety of trucks waiting to check in. The VIPs also inaugurated the Cross-Channels site’s drone-monitored Perimeter Fence Surveillance System. It is the first system in Europe (since January 2019) licensed to fly drones over private sites out of direct sight, by day and by night under the simple supervision of a teleoperator. Since the decision of the United Kingdom to exit the European Union, Dunkerque-Port has made the necessary adjustments to the controls of goods and people as part of the creation of this new frontier in Europe and has carried out other works in response to the urgency of the situation:

For Export Flows (out of France)
• Establishment of a third passport control booth for the French Border Police (PAF)
• Extension of boarding car parks,
• Creation of counters to enable customs officers to carry out tax refund formalities and process declarations.

For Import Flows (into France)
• Allocation of premises for customs authorities (offices, counters and support services);
• Fitting-out of a hangar to control heavy goods vehicles,
• Redevelopment of the quayage, traffic management and signalling systems at the exits of the link-spans in order to sort the heavy goods vehicles and create a waiting parking area for those subject to formalities.
• Creation of a tax-refund area and random control zone comprising offices, recreational rooms, washroom facilities, search room, storage room and kennels;
• Creation of a heavy goods vehicle parking area as an extension to the facilities of the Veterinary and Phytosanitary Inspection Service (SIVEP) to accommodate heavy goods vehicles subject to this type of control.

Since March 30, the French government services (the Customs Authorities and the Regional Directorate for Food, Agriculture and Forestry (DRAAF) have being organizing themselves to use the infrastructures created by the ports 24 hours a day. DFDS, for its part, has supplemented the information system developed by the customs services with a computer application that informs each driver of the “customs” status of their cargo, during the actual crossing. As for the port of Calais and Eurotunnel, all of these facilities and systems will be tested on 24 September 2019 for exports and imports alike. Selected heavy goods vehicles will be given an opportunity to test both the smart border allowing them to fill in their customs declarations on departing from Dover, thereby facilitating the processing of customs procedures upon their arrival in France, as well as the new traffic control system on the port of Dunkerque.