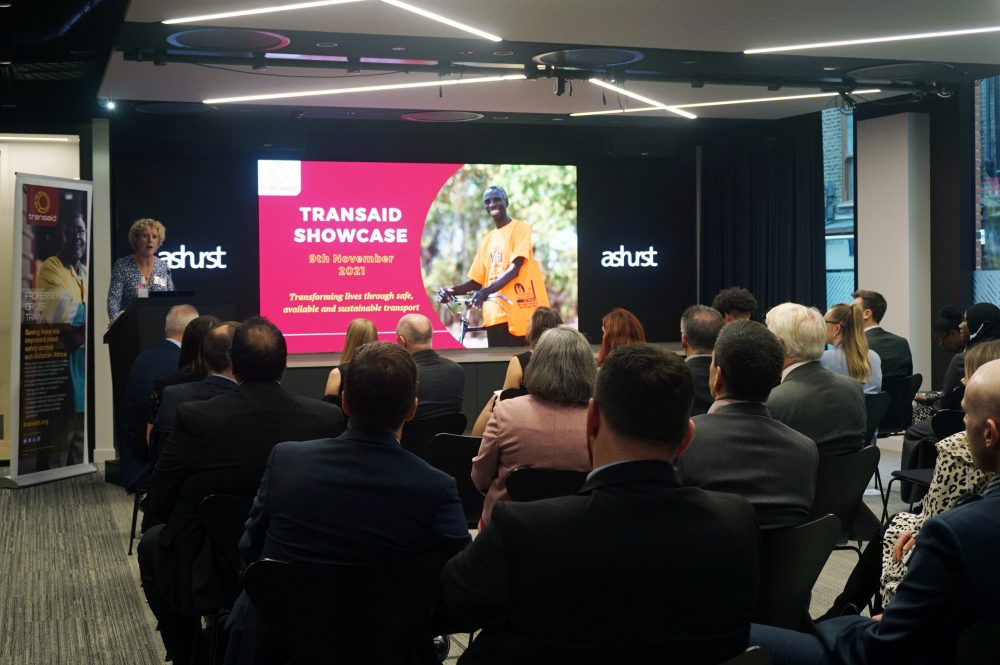 Transaid used the occasion of its recent annual showcase in London to announce the further expansion of its professional driver training programme into Mozambique – less than a year after securing the funding to launch a similar project in Ghana.

Chief Executive Caroline Barber shared the news with a group of around 100 corporate members and supporters gathered at law firm Ashurst LLP on Tuesday, highlighting how the international development organisation’s track record for delivering life-saving work means it is now regularly approached to expand its activities into new countries.

Opening the event, she said: “We have already built many sustainable and impactful partnerships around our road safety work, but sadly there remains considerable need for similar programmes in many more sub-Saharan countries.

“The Mozambique project is expected to kick-off later this month, with funding from the German government, and we are confident that by sharing our knowledge and expertise, we can improve training standards and make the roads safer for everyone.”

Recognising Transaid’s resilience during the pandemic, she added: “I am very proud that during these challenging times we have managed to carry on delivering impactful work and incorporated a successful COVID-19 response into many of our programmes. This has only been possible thanks to our strong partnerships, incredible teams and partners in Africa, and the remarkable support from the transport industry and those that fund our work.”

The showcase also provided an opportunity to share updates on many of Transaid’s 12 live programmes which currently span nine countries. This includes a recent project to help mobilise Africa’s young women into the labour force, by first understanding the challenges they face when accessing public transport in outlying neighbourhoods.

Transaid patron Her Royal Highness The Princess Royal also addressed the audience in a video message, in which she thanked the industry for its tireless support.

The event concluded with the presentation of the Victor Simfukwe Awards, in memory of the former Transaid team member who passed away in 2019 following a road traffic accident in Zambia. Now in their second year, the awards recognise an individual who has made an outstanding contribution to further the organisation’s work in the previous 12 months.

Transaid Project Officer Shadi Ambrosini was Highly Commended for his outstanding efforts across multiple projects, whilst the overall award was won by Guy Heywood, Director Marketing & Sales Europe at Hankook, for his outstanding fundraising achievements. Within the last year alone this has included running the London Marathon and cycling 503km across Malawi – both virtually.

Speaking after the awards, Heywood said: “There were definitely tough times during these challenges, but I completed each one with a smile on my face as I crossed the finishing line – both from knowing it was over, but also from the reassurance that Transaid will use the money to improve peoples’ lives. I am truly humbled to be associated with Victor; his dedication to saving and enriching lives was outstanding and what always impressed me was his positive and smiling attitude.”