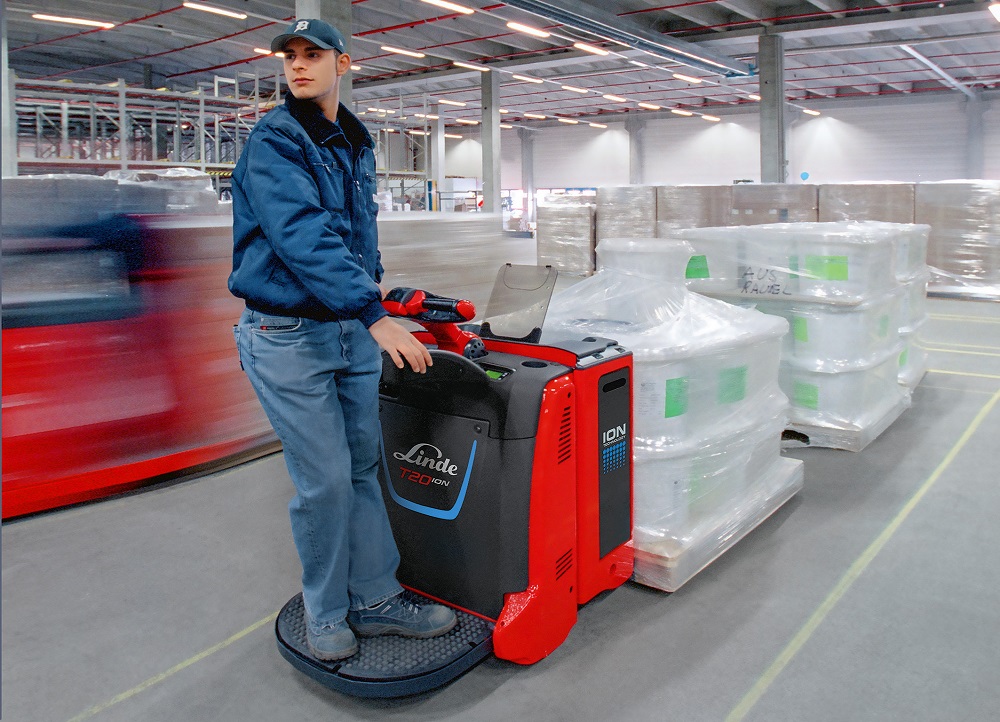 Since the introduction of lithium-ion (Li-ion) technology to Linde Material Handlings (MH) product portfolio, these maintenance-free batteries have proven their worth in a wide spectrum of applications, including the cold storage and food logistics sectors, for example. Due to the positive response from the market, the company is now offering a significantly expanded range. In addition to the previously available pedestrian pallet trucks Linde T16 ION and Linde T18 ION, now pallet trucks with stand-on platform, low level order pickers and initial tow tractor models can also be ordered with Li-ion technology. Moreover, new and more powerful batteries with a capacity of 4.5 or 9.0 kWh complement the previously available spectrum of 1.8 and 3.6 kWh.

More and more users from logistics and industry appreciate the benefits of Li-ion technology over traditional lead acid batteries. Experience gained in practical use confirms: With a guaranteed 2,500 recharging cycles, the life of a Li-ion battery is at least twice as long than that of lead variants, and in some cases several times as long depending on the application in question. In addition, the energy efficiency of the new technology is significantly better. More than 90% of the charged energy can be used to drive the vehicle, compared to only around 60% with the conventional technology. This means a clear gain in efficiency. Whats more, after reaching the guaranteed service time, the Li-ion battery is far from having reached the end of its lifecycle. Around 75% of the original storage volume is still available so that the battery can be used for up to 10 years and longer, depending on the application.

Flexible recharging and powerful batteries with 4.5 and 9.0 kWh

Currently, Li-ion technology is mainly suitable for logistical tasks that are not carried out continuously over a full shift, but are more typically associated with breaks in operation, for example, the loading and unloading of trucks. These breaks can be used to recharge the devices. Full charging is complete after 90 minutes. After just 40 minutes, 60% of the charge level is available again. In comparison to lead-acid batteries, the Li-ion components also benefit from their higher energy density. That means that the new technology allows the accommodation of more power especially in narrow vehicles such as pallet trucks and tow tractors. Following this approach, Linde MH has added even more powerful batteries with 4.5 and 9.0 kWh to its portfolio. Thus, the manufacturer now covers a wide capacity range from 1.8 to 9.0 kWh so that additional applications in the higher load range are possible.

Linde MHs pedestrian pallet trucks Linde T16 ION to Linde T18 ION, featuring load capacities of between 1.6 and 1.8 tonnes, have been successfully positioned on the market since 2014. To cover even more logistical applications with Li-ion technology, the manufacturer is expanding its range with various new models. These include the pedestrian pallet truck T20 ION, the tow tractors P30 C ION and P50 C ION with towing capacities of 3.0 and 5.0 tonnes, the stand-on platform pallet trucks T20 SP/AP ION, T24 SP/AP ION and T30 ION, as well as the low level order pickers N20 ION and N24 ION  each of these in application-specific variants. The batteries can be recharged quickly and easily via the standard, lateral charging plug without the operator having to open the battery cover.

Suitable for use at low temperatures and in sensitive areas

The accumulators Linde MH uses for its 24 V vehicles are based on safe and reliable lithium-iron phosphate technology. The devices can therefore be used efficiently at ambient temperatures ranging from -35 to +45°C. This is why logisticians in the cold storage sector in particular rely on the new technology.

Communication between vehicle and battery

As a result of their near-practice development, the lithium-ion batteries are perfectly matched to the vehicles from Linde MH. This is especially true for the safety-relevant attachment of the batteries, which must withstand vibrations of varying intensity in daily operation. When converting to the new technology, the corresponding charging equipment can also be supplied by Linde MH. The battery management system (BMS) fitted in the batteries communicates with the vehicle and the recharging device via a CAN bus interface. The BMS indicates the state of charge and the remaining battery life to the driver on the display. In addition, the BMS ensures that the Li-battery is neither completely discharged nor overcharged and thus contributes to its optimum service life.

Preparations are already underway in Linde MHs development department for the first generation of counterbalance trucks featuring lithium-ion batteries. Unlike the current warehouse trucks, these will not be designed for 24 V battery voltage, but for 48 V as is usual for forklifts.