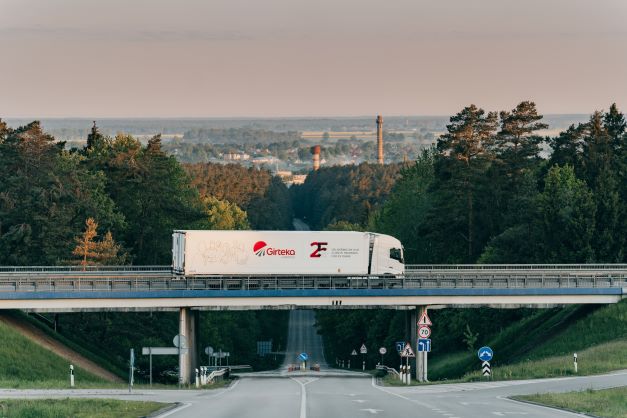 The new additions to the Mobility Package regulations will come into effect in February 2022, and a leading European digital trucking company, Girteka Logistics, says it is ready.

Even despite the pandemic-related challenges that have still not lost their relevance in the road freight transport industry, the new regulations are set to make very significant changes to how cargo travels on the road in Europe. The upcoming changes are part of the whole Mobility Package, which addresses several key areas in the European Union’s (EU) road transport system, not exclusive to road freight transport services.

With the deadline looming, and as logistics providers began to prepare for the enforcement of the Mobility Package, it was clear that the changes would make the industry better for its most crucial cog in the gears, namely the drivers, and more complicated for the industries’ representatives to organise road transport processes.

As mentioned above, the key change is that drivers will now have the option to return to either their place of residence or their truck company‘s base, while the truck will have to return to the country of registration every eight weeks. The European Commission has also looked into the rules of cabotage operations, as well as working and employment conditions for those who are behind the wheel on Europe’s roads.

In terms of rest and driving conditions and rules, while they have applied since August 2020, will only add to the complexity of the incoming shift in the EU‘s regulatory base. For one, drivers will now have to take their weekly rest periods of 45 hours in proper accommodation facilities, rather than the truck cabin.

While it is a definitive improvement to the working conditions of the drivers, the issue is the lack of accommodation facilities throughout Europe, as well as current facilities hardly being able to accommodate the number of drivers and semi-trailers themselves.

That is not the only criticism that the Mobility Package has received, as the EC itself concluded a study to determine how would “the compulsory return of the vehicle to the Member State of establishment every eight weeks and the application of cabotage quotas on international combined transport operations,“ affect the industry with a particular focus on emissions.

The study concluded that the new regulations would impact the environment negatively and would increase the emissions of the industry going forward.

While uncertainty followed the industry for the past few years, mainly due to the pandemic, there were hopes that the newest regulations would be delayed – alas, they will go through in February 2022. Nevertheless, as companies prepared to adapt to the changes related to the package, some of the uncertainty was cleared up.

“Firstly, to be closer to our customers in Western Europe, we will open a base in Poznan, Poland, which should be fully operational by the end of 2022. The base has required a lot of investment in human and other resources, as we will have to refurbish it to satisfy our needs, and to ensure that the base will provide as much comfort for our drivers as possible,” commented Mindaugas Paulauskas, the Chief Executive Officer (CEO) of Girteka Transport.

Secondly, according to the CEO of one of the Girteka Group companies, the requirement to return the trucks and drivers to their base of operations or country of residence every eight and four weeks, respectively, will require the company to hire more drivers, which is no easy feat considering the rampant shortage of drivers across Europe.

“We have worked for years to ensure that Girteka Logistics remains an attractive employer for our current and potential colleagues, as we look to proactively solve the driver issue and so far we have been successful in doing so, as none of our trucks are standing still at our base,” continued Paulauskas.

According to the executive, the newly-placed cabotage restrictions will also be challenging for carriers and shippers, as already, there was a widespread shortage of capacity throughout Europe due to the mentioned driver shortage, as well as manufacturers struggling with their own supply chain issues, resulting in a deficit of new trucks globally.

“We also have to consider that if trucks and drivers need to return to their bases after a certain number of weeks on the road, these processes have to be monitored closely in order to not only avoid fines but to also ensure that we keep our high standards of services, despite any changes to the regulations,” concluded Paulauskas.

However, according to another Girteka Group executive, prices for transport services will rise directly because of the Mobility Package.

Coming into the year, carriers faced a difficult operating environment, as prices for fuel, and other raw materials, have continued to climb, while other operating expenses increased as well. The Mobility Package will not ease the situation, and on the contrary, make it only worse.

“The Mobility Package, which will see the light of day in February 2022, will bring even more instability and a more volatile pricing environment, leading to even higher transport prices in Europe,” stated Pavel Kveten, the Chief Operating Officer (COO) of Girteka Logistics European Business Area.

As Kveten expressed, the new regulations will come into effect in a difficult environment for carriers, as in addition to the past year’s difficulties continuing into 2022, a new COVID-19 variant could provide even more instability in the next coming months.

Still, the source of the potential price increases “is the fact that trucks and drivers, on separate timelines, will have to return to their locations of registration and/or residence, possibly imbalancing trade lanes across the continents. Certainly, fuel, planning, and other operating expenses will once again grow, which will proportionately increase the prices for services in the EU,” continued the COO.

“I have full confidence that our preparation work will enable us to continue offering the highest quality of services to our customers, despite the possible uneasiness we had expected for the upcoming months,” assured Kveten.