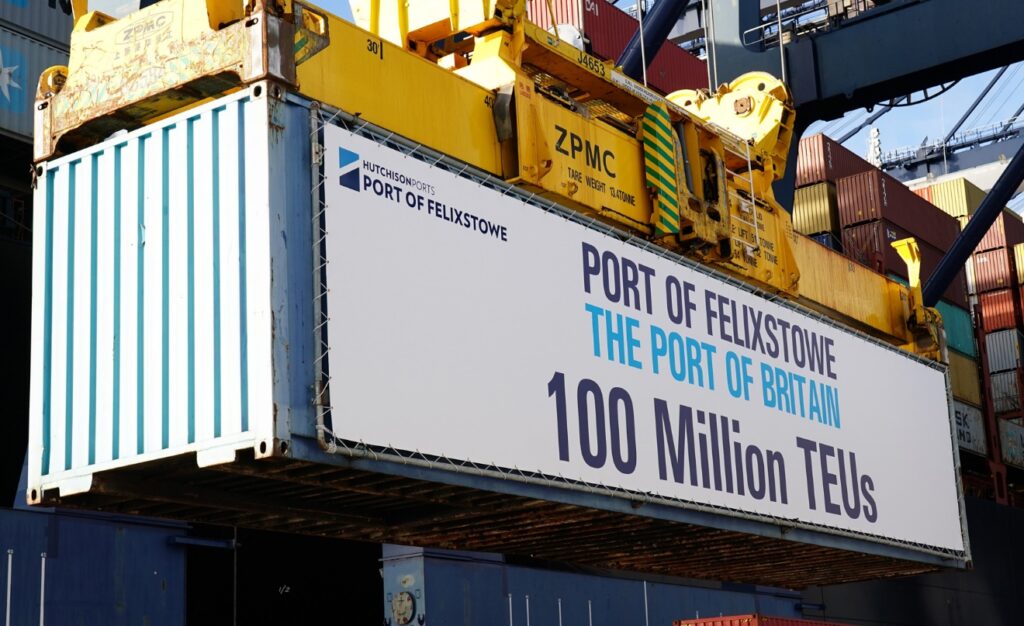 Port of Felixstowe has passed the 100 million TEU mark since it handled its first container in the 1960s.

Commenting at a ceremony to mark the occasion, UK Maritime Minister Robert Courts MP said: “The tens of thousands of maritime workers who keep our critical goods and supplies moving are the backbone of our freight sector, and kept this country’s supplies moving throughout the pandemic.

“Congratulations to the Port of Felixstowe on the 100 millionth TEU being loaded, which is a landmark moment for the UK’s busiest container port.”

Chris Lewis, Chief Executive Officer at the Port of Felixstowe, said: “The Port of Felixstowe has been setting the benchmark for UK container ports since we handled the first Sealand containers in what was then the Dock Basin in 1966. We followed that with the first operational container terminal the following year and have been leading the way ever since.”

Clemence Cheng, Managing Director, Hutchison Ports Europe, added: “Looking to the future we are committed to continual investment, upgrading existing facilities, building new infrastructure and constantly improving systems, equipment and the way we work to deliver the level of service our customers require.

“As the number of ultra-large container ships increases we are continuing to invest in the facilities they require. Berth 7 has been deepened to 16.5m and next year we will increase Berth 6 to the same depth and future-proof Berths 8&9 by increasing them to 18m, further enhancing our ability to work the largest container ships afloat.

“At the same time we will be driving forward our agenda to ensure we do this whilst cutting our environmental impact and working towards net-zero emissions.”

The work to deepen berths complements work being undertaken by Harwich Haven Authority to deepen the port’s main navigation channel from 14.5m to 16.0m. The additional depth in the harbour and seaward approaches will provide unrivalled deep-water access for the growing numbers of super-sized vessels that serve UK trade.