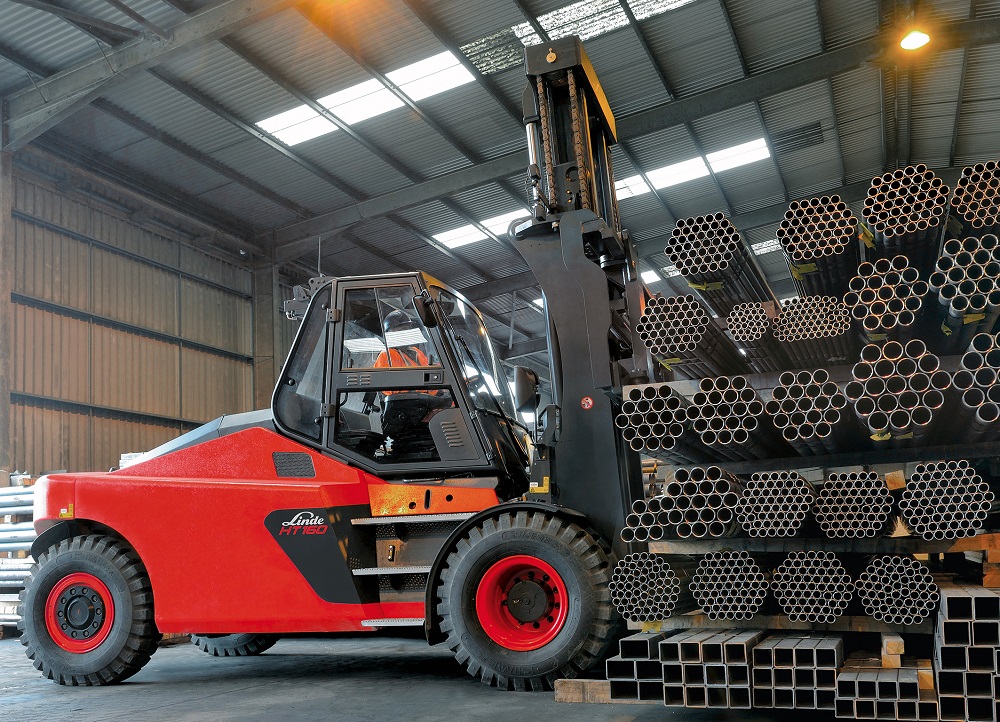 Lindes new heavy diesel forklift trucks HT100Ds to HT180Ds with hydrodynamic drive are the second series in the load capacity range between 10 and 18 tonnes that Linde Material Handling (Linde) is offering its customers as an alternative to the hydrostatic drive concept. The compact trucks set new standards in their weight class in terms of comfort, safety, operational efficiency and ease of maintenance. Due to the new vehicle geometry, the driver always has a clear view of the load and route, and thus ideal conditions for fast and safe working. In addition, the maintenance interval has increased to 750 operating hours due to the new MTU diesel engine. This means that the Linde trucks are not only significantly better than the market standard, but also meet the growing demand for shortest possible downtimes by port logistics operators and industrial companies.

The new heavy trucks are suitable for both indoor and outdoor applications and they can handle a wide range of transport tasks where heavy loads need to be moved quickly and safely. So that customers can configure the vehicles according to their specific applications, Linde attached special importance to developing a modular basic concept. The compact powerhouses offer 10, 12, 14, 15, 16 or 18 tonnes of load capacity and are available with engine power of 129, 150 or optionally 170 kW. Moreover, almost all models can be provided with a load centre of gravity of either 600 or 1200 millimetres. Also on offer is a wide range of fork positioners that can be flexibly adjusted to the specific transport task and the type of cargo. For loading and unloading on difficult surfaces, for example, a fork positioner with level adjustment of +/- 5 degrees is available. Furthermore, users can choose between integrated, hook-on and bolt-on forks as well as shaft-guided forks.

In addition to their large number of optional features and variants, the heavy trucks have even more to offer: first of all, they are characterised by compact design despite their load capacities. The exhaust aftertreatment system including exhaust pipe, air intake and combined cooler are integrated in the dynamic chassis and give the operator clear view of the route behind during reversing. Moreover, the large rear window, an almost central seating position and the intuitive layout of the control elements all ensure a high level of manoeuvring safety for the driver. When lifting loads, the driver has an unobstructed view through the panoramic toughened glass roof to the forks and the load. The tilting cabin in combination with the level integrated combined cooler secures ease of maintenance. While the cabin can be tilted forwards electro-hydraulically, the combined cooler opens backwards. The advantage of this is that the tilted cabin does not take up space laterally and thus the service technicians can access the components in the engine compartment from both sides. The compact vehicle design is complemented by particularly robust components for the mast, axles, hydraulic system and transmission. The MTU engine with integrated exhaust aftertreatment using AdBlue or Diesel Exhaust Fluid (DEF) meets the current EU emission standards Stage IV and EPA Tier 4 and is quiet, reliable and fuel-efficient in operation. Maintenance is required no sooner than after 750 hours of operation, which makes it not only more service-friendly, but also more economical than other engines on the market that need to undergo maintenance earlier, after around 500 operating hours.

As is usual with Linde, there is an extensive list of additional features so that customers can optimize the trucks according to their specific applications. First and foremost, these include the Linde SMS (Service Monitoring System) which not only indicates important operating and usage data to the driver, but also calculates the service intervals for the truck based on this information. A new benefit is that, in addition to the operating hours, the system can also detect whether the truck is actually in motion or stationary but with the engine running. Thus, the number of oil changes for transmission, drive axle and hydraulic system can be ascertained based on usage and therefore significantly reduced. This opens up clear time and cost benefits. Other useful truck equipment options include, for example, 7-inch displays in the cabin, a rear-view camera with automatic reversing radar alarm and numerous attachments that facilitate the transport of bulky and long loads.

The new heavy trucks HT100Ds to HT180Ds with hydrodynamic drive are offered worldwide with two types of engines, MTU and Perkins, depending on the applicable emission class of the target region. Even before their launch on the market, the trucks have proven their worth in long-term field tests: for example, in harbour logistics in transporting bulk material and steel goods in the port of Flixborough, United Kingdom, and at BESTA Eisen- und Stahlhandelsgesellschaft in Lübbecke, Germany. Other potential fields of application for the new trucks include, for example, the construction, woodworking and automotive industries.