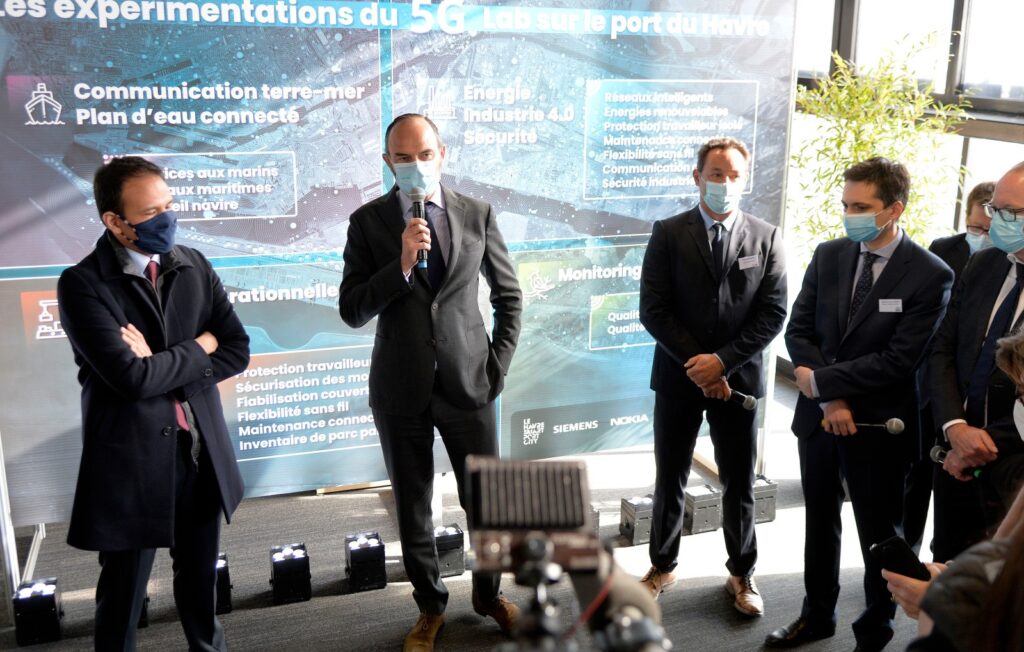 On his visit to Le Havre, Cédric O, France’s Secretary of State with responsibility for the Digital Transition and Communications, set out to take stock of current development projects based around new technologies. After being designated two years ago as an “Innovation Area” Le Havre, having earned a reputation as ground-breaker, is now on the point of moving from trials to commercial roll-out.

Back in 2018, as part of the Smart Port City programme, the “5G Lab” collective centred on the port and the urban community was formed with three industrial corporations – Nokia, Siemens and Électricité de France (EDF). The objective of the five partners was to identify application scenarios that could, after some experimentation, be developed across the Seine Axis ports.

In the presence of Edouard Philippe, Mayor of Le Havre and Chair of the Le Havre/Seine Urban Federation, Cédric O took this opportunity to discuss the issues with the partners and to analyse the progress made on the identified application scenarios. The core issue is of major importance: how in a competitive context to add to the attractiveness not only of the port complex but also the entire Seine Axis.

Among the first application scenarios that have been identified there is the optimisation of upkeep operations for the port’s navigational areas: the implementation of 5G would notably provide improvements and greater safety for the daily dredging campaigns in the channels and docks.

A major step forward has also been made in the city and port 5G trials. This is so because Stéphane Richard, CEO of Orange, the French telecoms operator, has announced the roll-out of 5G, which will boost the projects currently in their test phase. This announcement is encouraging for the port and its partners in their ground-breaking drive for digitisation of the local region.

“The Smart Port City programme is a shared ambitious goal to make Le Havre a port complex that stands as a benchmark for the ability to innovate. This remarkable partnership-based effort around 5G will give the port of Le Havre a core technology conducive to the invention of novel applications able to be duplicated subsequently elsewhere in the world,” explains Edouard Philippe, Mayor of Le Havre and Chair of the Le Havre/Seine Urban Federation.

In the view of Baptiste Maurand, CEO of HAROPA – Port of Le Havre, “5G offers interesting possibilities for making the port more competitive. For example, it can help us improve communications between sea and land. Just having a network-connected port navigational area will enable us to optimise certain operations that are essential to safe navigation in the port. It will also allow us to gather multiple types of data (weather, seabed conditions, and so on) for greater precision and efficiency. The primary beneficiaries will be our customers, among them the 6,000 ships that call at our port every year.”

Matthieu Bourguignon, Vice-President Europe, Nokia Enterprise adds: “Nokia is very proud to partner Le Havre city and port in their innovative drive for digitisation, notably by contributing to the 5G Lab. We will be using it to trial a range of industrial applications to demonstrate what dedicated 5G coverage can provide in a port environment. The segmentation of the network – ‘network slicing’ – made possible by 5G will allow us to allocate the data rates, latency and levels of security required for each user, thereby helping the port of Le Havre enhance its attractiveness.”

Antoine Garibal, Director of Strategy at Siemens France, expresses the view that “in the 5G Lab collective, working in close partnership with HAROPA – Port of Le Havre, Siemens provides fine-grained expertise in industrial processes and digital transformation along with tried and tested methods for identifying new applications of 5G for the port of Le Havre and its industrial complex as a whole. The trials conducted with our partners have led to the identification of new applications, demonstrating that 5G’s reliability and flexibility make it a particularly suitable data communication solution for Future Industry and the Seine Axis ports.

“This ambitious, rigorous approach based on co-construction is the right solution for the requirements of industrial companies, providing greater resilience, competitiveness and sustainability.”

Alban Verbecke, Director of Normandy Regional Action at Électricité de France explains: “The 5G Lab in Le Havre will allow us to field-test 5G’s technical capacity to manage electricity grids. 5G’s low latency is a real breakthrough in this area, especially for micro-grids.

“In addition, the analysis of application scenarios for the port/industry complex is also of interest for EDF as an industrial company. The initial applications for information system security, Industry 4.0, drones and industrial safety/security are of interest to the Group as a potential customer for these forms of technological progress.”