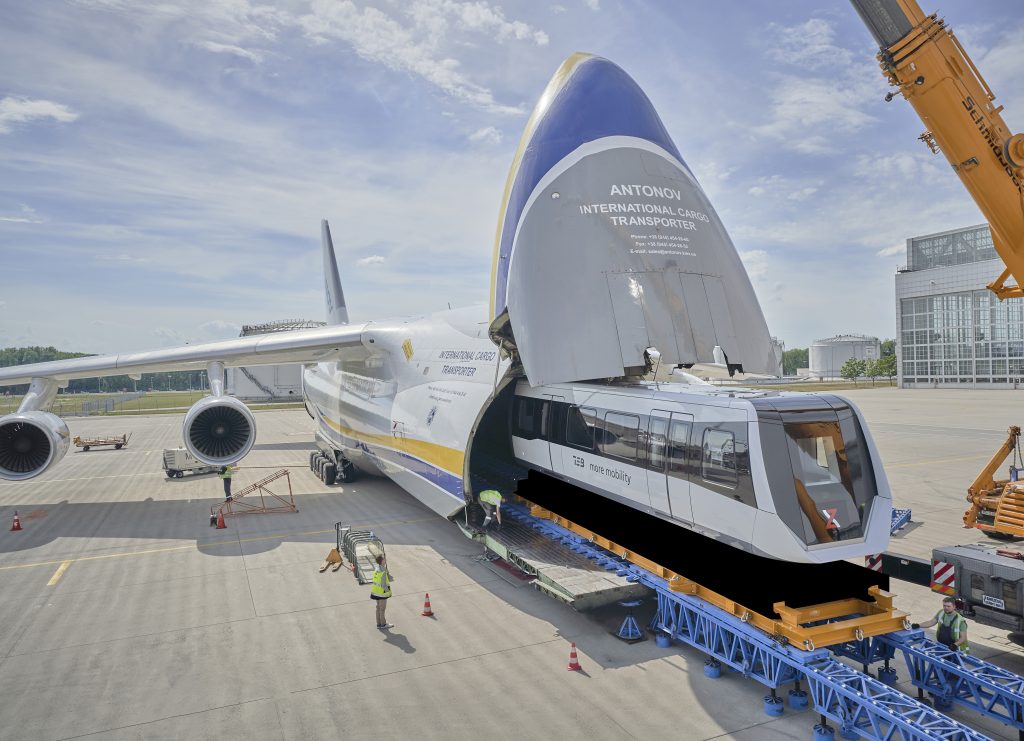 The Max Bögl group is sending the first two-section vehicle of its Transport System Bögl (TSB) with one of the world’s largest transport aircraft to its place of operation in China. This is the next milestone for the finalisation of the train demonstration track in Chengdu. The new type of local passenger transport system will start operation on the 3.5-kilometre track in the summer.

After the first series-production vehicle had been pre-commissioned in Sengenthal in the past few months and tested for its use in China, it spectacularly made its way to the Chinese partner in early June. On the way to its destination, the novel traffic system was first loaded onto trucks at the Max Bögl group’s headquarters and then transported to Munich Airport. From there, the new series-production vehicle was transported by the Antonov 124-100, one of the largest transport aircraft worldwide, to Chengdu, over 7,500 km away. The TSB team will commission the vehicle together with the Chinese partner company Xinzhu.

The optimization of local public transport using the latest technologies is highly valued by the Chinese government. The demonstration track in Chengdu illustrates the possibilities of the innovative Transport System Bögl for local public transport. The track of the TSB is very low and light with a girder of 1.2 metres in height and 23.5 metres in length. Compared to conventional systems, it avoids the high loads at the wheel-rail contact point, which are the main cause of vibrations and noise. Instead, the transport system guides the loads evenly distributed into the track without contact and is therefore very quiet and manages with considerably smaller substructures for the track. This not only saves on raw materials and costs, but is also aesthetically pleasing.