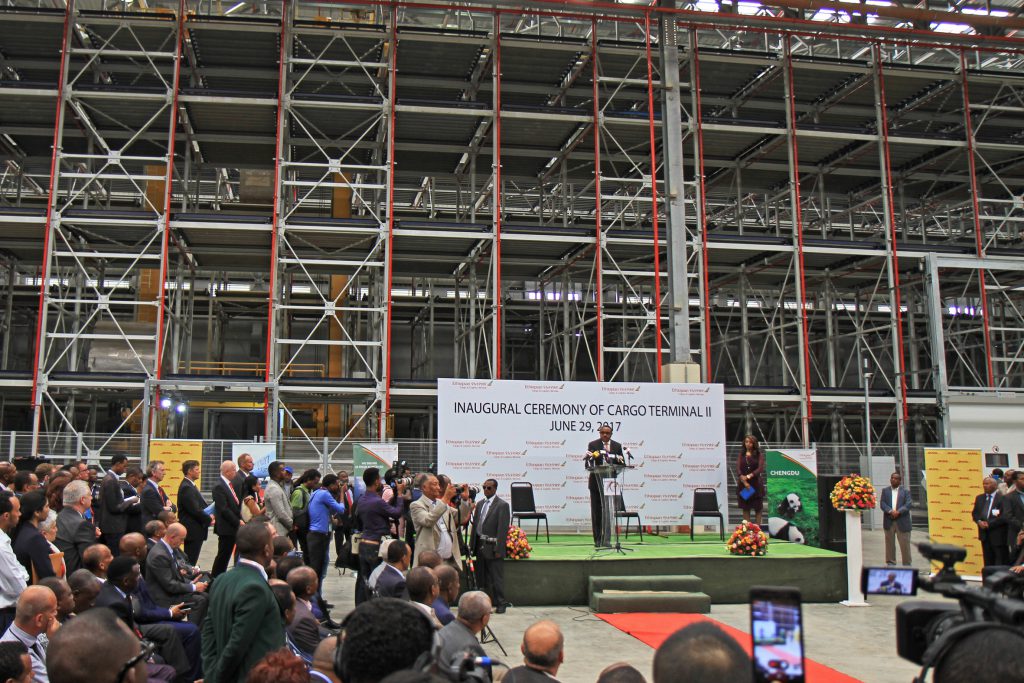 Ethiopian Airlines celebrated the opening of its new air cargo terminal at the Addis Ababa airport in Ethiopia on June 29, 2017. The facility was realized by ACUNIS, a joint venture of AMOVA and Unitechnik specializing in air cargo intralogistics. The new facility is the largest of its kind on the entire African continent and Ethiopian Airlines expects to transship around 600,000 t of goods per year from this terminal in future. Around 600 invited guests from the world of politics and business and the air cargo industry took part in the opening ceremony. Among the first well-wishers was also Ethiopian Prime Minister Hailemariam Desalegn.

Intended to establish Addis Ababa airport as an international hub for freight handling, around $125m went into the construction of the cargo terminal. It is the largest and most state-of-the-art facility on the African continent and pioneering both in regard to the level of automation as well as safety standards. In addition to imports and exports for local markets, the airport is going to serve as a hub for global flow of commodities. Consequently, an expansion of the cargo terminal to a capacity of up to 1.2m t per year in the near future is already planned, according to the operator, Ethiopian Airlines.

As general contractor, Unitechnik was responsible for planning the entire terminal and implementing the technical equipment, specifically the logistics systems. AMOVA contributed the mechanics for the cargo handling system. The heart of this installation are two automatic warehouses for air cargo containers (unit load devices, ULDs) with space for 1,000 10-ft containers with a total of 4 elevating transfer vehicles (ETV). Half of the 38,000 m² hall complex is devoted to the handling of fresh goods and chilled to a temperature of 2 to 10°C. “Planning and realizing a project of this complexity is always an exciting task. It was not least of all the good cooperation with the local construction company Vanero that allowed us to master the challenges associated with its realization successfully. We are now happy to celebrate the opening of the facility which will provide an important stimulus for Ethiopia’s economy and infrastructure,” said Torsten Ley, Managing Director of Unitechnik Systems GmbH, during the opening ceremony.