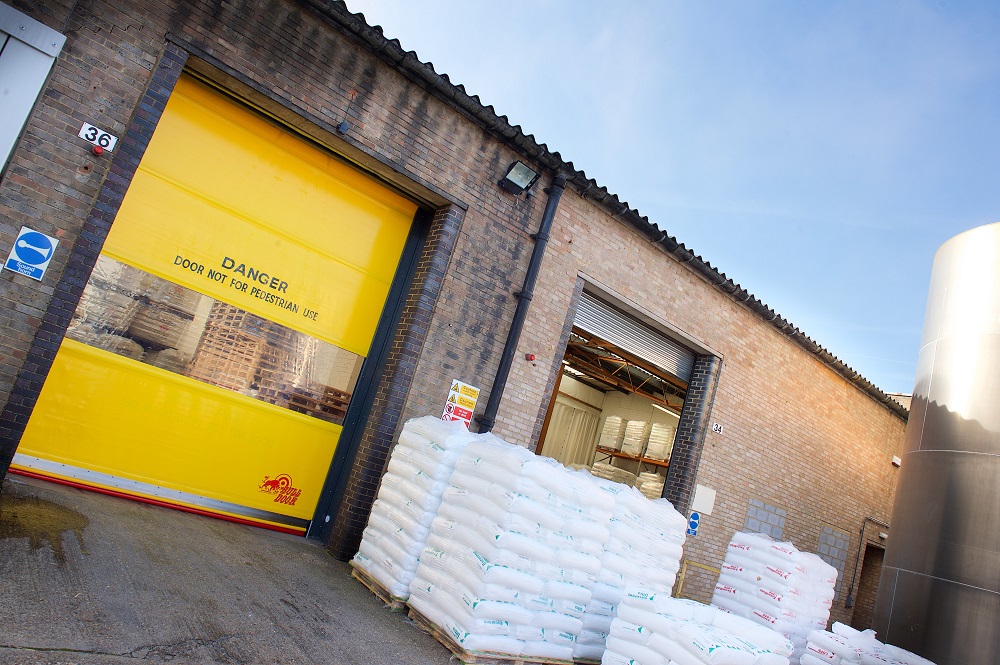 Union Industries is enabling hot melt adhesive manufacturer, Beardow & Adams (Adhesives) Ltd, adhere to strict standards set by the BRC/IoP, a leading body in the retail sector, with the installation of two of its marketing-leading products.

Ahead of a BRC audit, Union Industries has fitted a high-speed Bulldoor to reduce the risk of ingress of airborne contaminants and wildlife, as well as one of its bespoke designed & manufactured Industrial Curtains that will also reduce the risk of contamination in one of the production units at Beardow & Adams (Adhesives) Ltd Milton Keynes headquarters.

The Bulldoor, which opens at approximately 1.6m per second, will defend against the elements and reduce the risk of contamination when the external opening is being accessed by forklift trucks, coming to and from the warehouse.

In common with the other doors in the range, the Bulldoor also features Unions highly-regarded Crash-Out damage protection facility, which ensures the door remains operable if the heavy duty steel composite bottom beam is hit by a vehicle, which reduces any downtime.

The Industrial Curtain, which is a Tensioned Mobile type curtain, has been installed between its production area and storage facility. The curtain stands at 18m wide with a 5.5m drop; it allows Beardow & Adams (Adhesives) Ltd to isolate its production area without the need for a solid wall or partition, which would not have provided the versatile solution the company required.

Now, with the mobile fabric partition in place, which features a high-level static infill section for improved sealing, employees can easily segregate the working area by drawing the curtain to create a more hygienic environment during the production process, which can be re-opened quickly & easily for planned preventative maintenance. The curtain also features a series of clear vision panels that allow the production process to be viewed externally without the potential to introduce further contaminants.

Although Union did not provide the lowest quote to Beardow & Adams, the contract was awarded based on its superior quality and robust design, which will pay dividends in the long-term; the Bulldoor is capable of completing more than 1.4 million cycles each year and has become a popular choice across a number of industries.

Established in 1977, Beardow & Adams is a world-leading hot melt adhesive manufacturer. Its products are used by more than 10,000 respected manufacturers and are used in demanding packaging, labelling, woodworking, product assembly, bookbinding and converting industry applications.

Alan Hirst, Sales Director at Union Industries, said: Its always satisfying when our products are chosen on the basis of quality; it provides further evidence that our Great British manufactured products are unrivalled by cheaper alternatives.

Both the Bulldoor and our Industrial Curtain have been tailored to meet Beardow & Adams (Adhesives) Ltd bespoke requirements in order to help meet, and in fact exceed, the requirements demanded from the BRC/IoP standard.

Peter Gallivan, Works Manager from Beardow & Adams (Adhesives) Ltd, said: When considering suppliers our main priority was quality, and Union stood head and shoulders above the competition. We see the money spent on the High Speed Door and Tensioned Mobile Curtain as an investment, which will continue to provide returns, thanks to their unmatched durability and reliability. Unions engineers have also been exceptional; they worked around our own schedule to ensure minimal disruption was caused, which was a great bonus for us