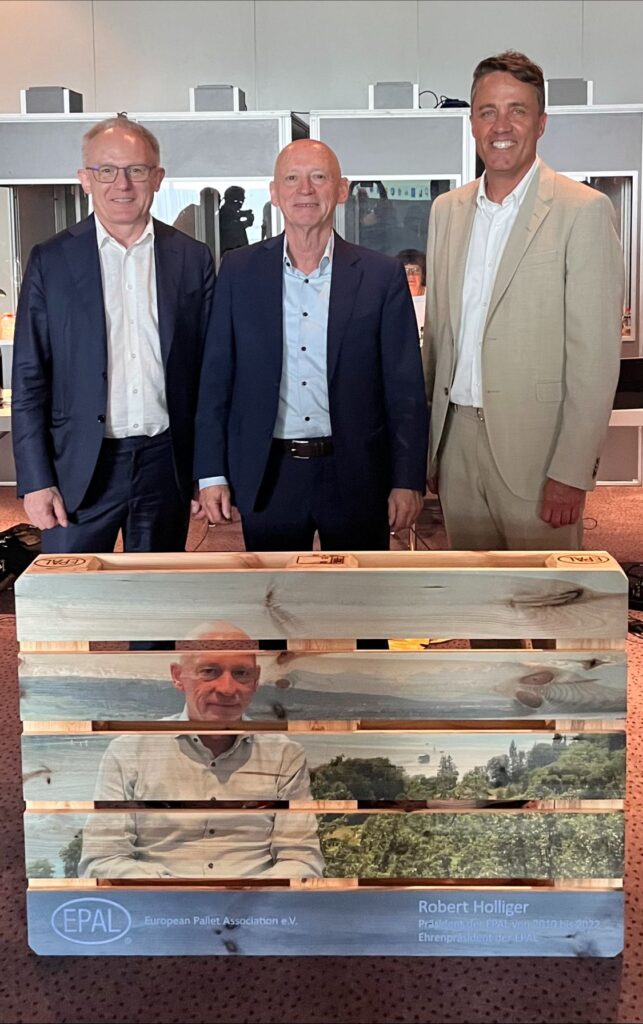 The General Assembly of the European Pallet Association e.V. (EPAL), held on 24 June 2022 in Zurich, has elected Dirk Hoferer and Jarek Maciążek as the new Presidents of EPAL. They will lead EPAL for the next three years as Co-Presidents. They have both been Vice Presidents of EPAL and have been active on behalf of EPAL Deutschland and EPAL Polska on the Board in recent years and contributed to the steady growth of the EPAL European pallet pool through their considerable personal commitment.

“I am looking forward to take on the responsibility for the continued positive development of EPAL with my Co-President Jarek Maciążek,” says Dirk Hoferer. “We have been involved with all of EPAL’s key projects for over ten years on the EPAL Board and Presidium and will continue our close collaboration as Presidents of EPAL. One of the key areas of our work will be to extend and further improve the significance of the open EPAL exchange pool for the circular economy, climate protection and the sustainability goals of retail and industry.”

With Maciążek and Hoferer, EPAL now has two highly experienced representatives of the pallet industry at the helm. For many years, Maciążek was on the board of the Polish company PalettenWerk, one of the largest pallet producers in Europe. Hoferer is the owner and Managing Director of the German company Treyer Paletten GmbH, one of the first EPAL licensees.

“EPAL’s strength lies in the direct involvement of companies who, as licensees, are active producers and repairers of EPAL pallets and EPAL box pallets,” explains Maciążek. “This allows us to ensure that every decision EPAL takes on the organisation of the EPAL European pallet pool is in line with the interests of our customers from the retail and industrial sectors who rely on the EPAL European pallet pool for goods and transport logistics. This will be the yardstick for the work of Dirk Hoferer and myself during our time as Presidents of EPAL.“

Hoferer and Maciążek are following Robert Holliger who led EPAL as its President from 2010 to 2022 over four terms in office. During this time, the number of EPAL Euro pallets produced rose from approximately 65 million per annum to more than 100 million in 2021.

“The EPAL Euro pallet pool developed into the largest open pallet exchange pool in the world while Robert Hollinger was in office,” say Hoferer and Maciążek. “Our aim is to follow this successful path and to establish EPAL as a modern association and an essential element of sustainable goods and transport logistics. On behalf of the EPAL Board and members of EPAL, we would like to thank Robert Holliger for his generous commitment to EPAL over many years.”

As EPAL Vice-Presidents, Maciążek and Hoferer had a close and confidential working relationship with Holliger over the years. The election of Hoferer and Maciążek thus ensures continuity in both EPAL’s work and the organisation of the EPAL Euro pallet pool. Holliger has been appointed as an honorary member and honorary president of EPAL by the EPAL General Assembly.