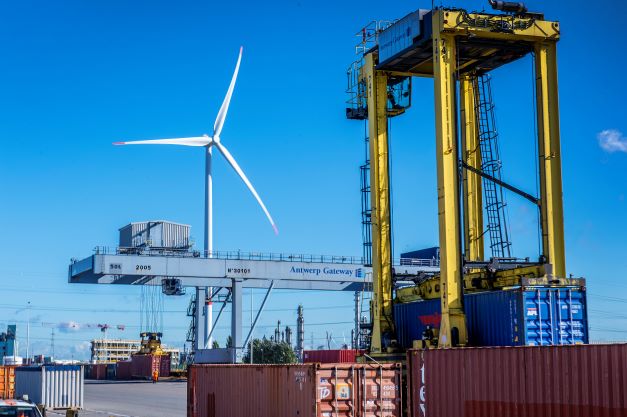 Innovation holds the key to reducing emissions and creating a greener and more sustainable trade and logistics industry in Europe, according to global end-to-end logistics and smart trade enabler, DP World.

DP World operates 20 terminals in 12 countries across the breadth of Europe, all of which are at various stages of their respective journeys towards implementing more sustainable operations.

The business has an impressive story to tell in Western Europe where its Rotterdam World Gateway (RWG) terminal, located in the Netherlands, is on the pathway to be the first carbon neutral container terminal in the world.

The fully electric terminal – renowned for its high level of automation – boasts a number of new and existing green innovations and technologies, including 84 electric lift AGVs (automated guided vehicles) that operate on green electricity and 18 state-of-the-art cranes that capture and regenerate their own energy. The use of plastic and other oil-based packaging materials at the terminal has also been cut back and all of its waste products can now be fully recycled.

In addition, RWG is also the first deep-sea terminal that is ‘LNG (Liquefied Natural Gas) ready’ and is capable of loading and unloading containers whilst the vessel is refuelling. The transition from using fuel oil to LNG as a sustainable fuel represents an important step in making shipping and the industry more sustainable.

In neighbouring Belgium, DP World Antwerp (pictured) has its own set of impressive green credentials, as the first terminal in the world to publish its own sustainability report. Between 2017 – 2018, the report found that DP World Antwerp saved over 10.6 million kilograms of carbon dioxide over a four-year period, while the business simultaneously took over 90,000 trucks off the Belgian roads in the space of a year by offering greener intermodal options.

Its commitment to sustainability is exemplified in its investment in automated stacking cranes, wind turbines and a biogas plant. In addition, the new operations building at the dock – part of the business’ €200m investment plan at the port – harnesses residual energy to control the temperature of the building, making it almost energy neutral.

Elsewhere in Europe, DP World-owned Unifeeder, based in Denmark, is a provider of the largest feeder and shortsea network in the region. The innovative firm recently introduced new state-of-the art live tracking technology – ‘Actual Emission Tracker’. The real-time tool calculates, on a micro level, the emissions of each individual twenty-foot equivalent unit, thereby giving businesses greater awareness, visibility and control over their overall emissions.

In September this year, Unifeeder announced its ‘ElbBlue’ vessel was carrying out a world-first trial voyage using liquefied Synthetic Natural Gas (SNG), a synthetic form of LNG that is carbon-neutal and generated from 100% renewable energy.

In Turkey, DP World Yarimca recently purchased hybrid vehicles and installed solar panels at the terminal that are expected to generate 4% of its annual electricity needs, helping to reduce overall carbon output by over 220,000kg per year.

Rashid Abdulla, CEO, DP World – Europe and Russia, CEO, commented: “We are absolutely committed to doing all we can to help not only our own operations, but also our supply chain partners and customers, reduce their carbon footprints. We are making great progress in the region, which is largely due to the adoption of innovation and technology, which drives awareness and visibility of where action can and must be taken.

“Over the next decade, consumer choice and corporate procurement responsibilities will drive this type of emission tracking and data capture from being a ‘nice to have’ to a ’must have’ and we want to be at the forefront of driving that highly significant change in attitudes.

“Our terminals in Rotterdam and Antwerp are leading the way and we have a number of exciting green solutions that will be implemented in other areas of Europe over the next five to ten years.”

Another key part of the firm’s green strategy in Europe is to reduce the number of trucks on the roads, achieved through the increased accessibility of intermodal transport across inland Europe. As a result, DP World’s Inland business unit – which operates across Germany, France, Switzerland, Belgium and the Netherlands – offers resilient trimodal-transport solutions to its customers, acting as a bridge for the flow of trade between European deep-sea ports and its network of inland terminals.

The firm offers rail and/or barge infrastructure at approximately 95% of its terminals in the continent and is investing further across its portfolio, including further east at its ports in Serbia, Romania, Ukraine and Turkey, helping to create more sustainable routes stretching across mainland Europe.

Abdulla continued: “Our Inland network is absolutely key to our strategy in Europe, with established rail networks in the UK and the vital Hinterland area in the northwest. However, our trimodal transport strategy stretches further east where our terminals in the Ukraine (DP World TIS Pivdennyi) and Turkey (DP World Yarimca) are already seeing the benefits of rail investment.”

A recent study revealed that, when using the same amount of fuel, trucks move cargo a fraction of the distance compared to alternative modes of transport such as rail and barge. The studied highlighted how trucks – operating off 4.5 litres worth of fuel – can only transport a ton of cargo 233 kilometres, whereas rail and barge achieve significantly higher distances of 768 and 1,041 kilometres respectively.

One significant example where DP World is looking to maximise barge use is on the River Danube, which passes through more countries than any other river in the world, thereby making it a hugely important trade route.

Barges on the Danube can transport goods all the way from south-west Germany, through several mainland countries, including Serbia – served by the DP World Novi Sad terminal, all the way through to DP World Constanta in the southeast coast of Romania, where it meets the Black Sea Basin connecting to Eastern Europe, Central Asia and the Middle East.

Abdulla added: “It is no secret that the industry must come together to make genuine and impactful sustainable changes as we look to achieve as a sector in supporting the net zero emission commitments made in the Paris agreement.

“At DP World we are very aware that we still have a long way to go, but we are excited by the progress made in recent years and we are in no doubt that we will be at the very forefront of that conversation in Europe.”