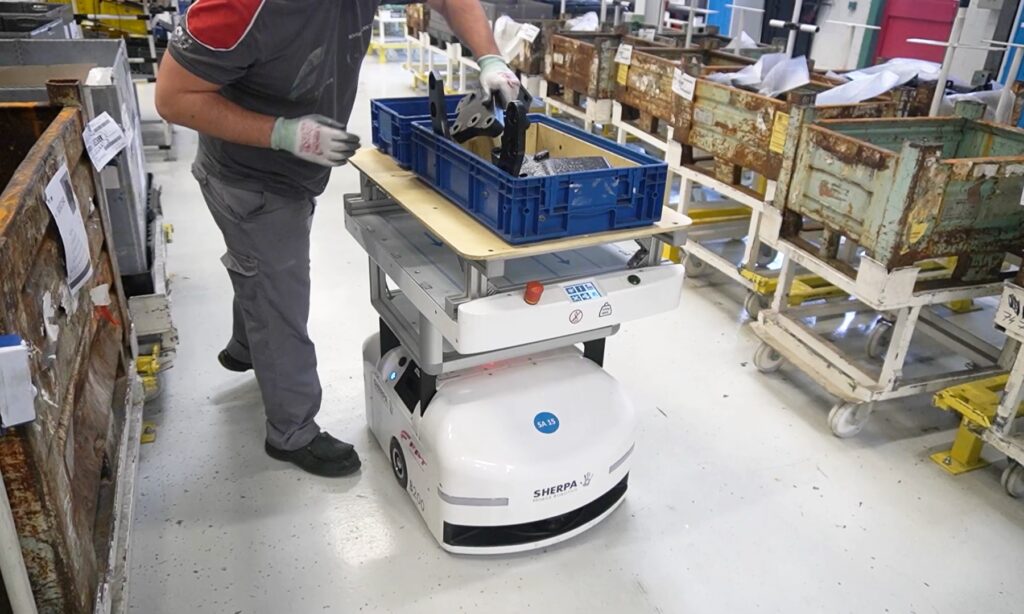 Sherpa Mobile Robotics has announced its first installation with fleet management at a French industrial engine-building plant. For a several weeks now, six SHERPA-B AMRs (Autonomous Mobile Robots) have been co-working in total safety amidst humans, AGVs, forklifts and other industrial machines at FPT Industrial.

The FPT Industrial plant in Bourbon-Lancy, in the Saône-et-Loire region, assembles 35,000 high-powered gas and diesel engines per year, destined for agricultural machinery, buses and trucks.

These parts are large and heavy, and with the specific tools needed for their assembly, the pallets were taking up too much space in the assembly line. Parts flow management and operator movements were not optimised. “We wanted to improve the logistics flow and the working conditions of our operators,” explains Ms. Faivre, Logistics Product Manager at FPT.

To achieve its objectives, FPT called on Sherpa Mobile Robotics and its mobile and collaborative robots. Unlike AGVs (Automated Guided Vehicles), these AMRs do not rely on dedicated paths. They are programmable to be able to adapt to their environment with its constraints and constant evolution. SMR proposed a complete reorganisation of the assembly line with the support of a fleet of six robots managed by its Fleet Management System software.

The assembly was reorganised into two parallel lines separated by a central aisle. One line is dedicated to the preparation of the sub-assemblies and the other to the assembly of the 150 engines to be produced each day, working in two shifts. The six robots are deployed in twos, two each for the three assembly stations for motor supports, motor flywheels and basins. At the robot’s departure point, one person prepares the parts. When the robot arrives at the assembly line, another person is there to receive the parts. The robots have three programmed missions for each of the assembly stations. Each robot brings a prepared and assembled sub-assembly from the preparation area to the assembly area and then returns.

Central to this organisation is line-side management that is both automated and mobile. The operators stay in their work area. The Sherpa robots come to them, carrying the parts and specific tools. The parts are prepared elsewhere, in the preparation line, where they are unpacked and laid out ready for assembly, along with the necessary tools. “The robot arrives at the right time with the right part,” explains Damien Winling, Technical Director at SMR. Using this fleet makes assembly tasks less arduous and reduces the risks associated with transporting loads. Because the flow is managed more smoothly, this increases productivity. The robots are used 20 hours a day. In total, 450 robot missions are carried out daily.“

“By increasing our productivity and getting closer to one piece flow, these robots are fully in line with our 4.0 strategy,” says Faivre.

Flexible paths thanks to AMR technology

The advantage of Sherpa robots is that they can move about amidst operators, trucks and AGVs. The AMRs do not use laser guidance or ground markers but rely on their intelligence and ability to create maps of the space and predefined routes, unlike AGVs which do not deviate from their routes. They offer maximum safety with regard to people, obstacles, and transported material. Each robot is equipped with a Lidar (360° laser navigation sensor), a robust and reliable localisation system and safety sensors to detect obstacles on the ground. The sensitive edges stop the robot if it touches an obstacle. Their safety electronics provide the means of verifying that the various instructions given to the external elements (motors, sensors, etc.) are correct.

“Because of their ease of use, these robots were readily accepted by the operators,” says Ms. Forat, WCM logistics coordinator at FPT.

“Their intuitive interface and controls are made easier by the Follow Me mode, where the robot moves in interaction with the operator,” adds Mr. Figueira, Logistics Method Technician.

Sherpa Mobile Robotics has developed its own Fleet Management System (FMS). The software offers a mapped view of the work area showing the robots’ movements, with mission indicators (time, movement, charge, etc.) for each robot along with their battery status. A Shercom module indicates the traffic in the area of the robots.

The FMS communicates with each robot which has previously defined mission. The operator on the preparation side dispatches the robot when it is loaded and ready. The FMS is notified when the operator indicates the end of the mission on the robot screen (HMI). The FMS manages the sequence of the robots and can put them on hold in a dedicated area.

The same principle applies to the assembly side: the FMS is informed when an assembly is completed, it returns the robot to the preparation area and inserts it into the next sequence.

Managing the fleet of Sherpa robots meant that they had be able to operate in the midst of an existing flow of AGV robots. For this purpose, SMR developed a barrier system with virtual doors which open or close depending on the AGV traffic. When the AGV has passed, and with the help of reliable communications, it opens the door again to the SHERPA robots which continue their mission.

Customers can always change the configuration of the robots themselves or change their missions. The FMS functions in alternation with Follow Me mode: when the robot is in the assembly area, it switches to Follow Me mode and follows the operator’s movements thanks to the on-board sensors. The fleet manager is a hardware independent system, which works with all the robots in the SHERPA range. The robots and the FMS are plug-and-play modules – they do not require any modification to the client’s infrastructure or IT.

“Integrating these six robots has allowed us to acquire substantial experience of fleet management in an existing environment. We will be able to deploy these new skills at other customers looking for this type of technology,” concludes Damien Winling, Project Manager at SMR.