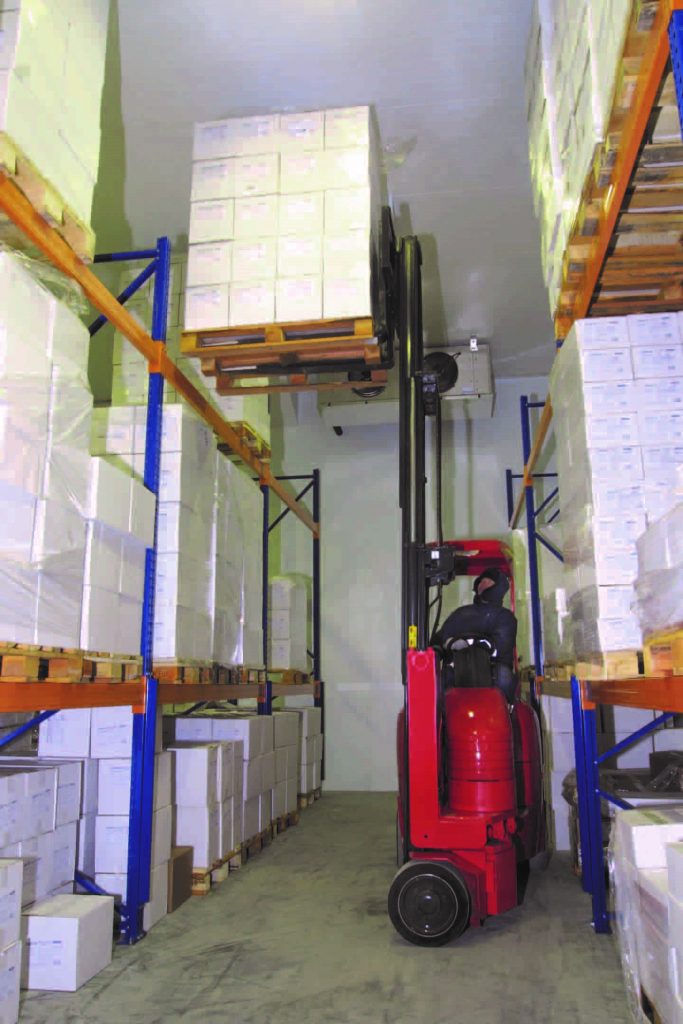 Third party multi-temperature warehousing and logistics network, Norish, operates lithium-ion battery-powered Flexi articulated VNA truck technology at one of its cold store facilities in the West Midlands. The company, which has used Flexi VNA trucks throughout its business for some 15 years, opted to replace the lead-acid battery-driven Flexis that had been in operation at the facility with new models from the Flexi LiTHiON range.

The fully integrated Flexi LiTHiON’s lithium-ion power system requires zero maintenance and no battery changing to deliver extended multi-shift availability at minus 28 degrees centigrade – making the Flexi LiTHiON the ideal solution for modern temperature-controlled stores. Delivery vehicles containing a wide mix of meats, sea food and raw ingredients from the UK and around the world arrive at Norish’s site throughout the day and are unloaded within sealed loading docks by powered pallet trucks before being collated within a marshaling area.

Full pallet loads are then collected by the Flexi LiTHiON trucks and delivered directly to the allocated cold store chamber where they are put away within a high-density very narrow aisle pallet rack system. The pallet racking is controlled using a warehouse management system that provides both pre-allocated locations for every product received at the store but also directs newly arrived chilled materials to one of the three ‘blast freeze’ zones in the store.

“Within any type of cold storage facility, it is essential to get maximum product density: the more pallets we can get into the warehouse the lower our operating and energy costs are,” says Stewart Lloyd, national engineering director at Norish. “The combination of high density VNA pallet racks and Flexi LiTHiON trucks allows us to maximise storage density and get great individual pallet accessibility,” he adds.

One of the key benefits that the switch to lithium-ion technology has brought to Norish is the fact that the Flexi LiTHiON machines do not require battery changes – the lithium-ion power source is recharged while the operator is taking one of his or her regular breaks from the cold store. This not only maximizes truck uptime but significantly reduces the requirement for Norish to allocate valuable floor space within the building to a dedicated spare battery charging and changing bay.

When it comes to battery management the Flexi LiTHiON monitors the battery function constantly and reports the battery status in real time, while water topping-up is not required, which means that the type of food hygiene and health and safety issues that can arise if liquids are spilt during the traditional lead-acid battery charging process, are eliminated. The fact that topping up is not required allows the truck to be charged in the store as required – rather than in a separate part of the building.

State of the art collaborative robotic – or ‘cobotic’ – digital technology controls all of the Flexi LiTHiON’s drive, hydraulic and power-steering functions and ensures that the trucks are able to perform at full power across multi-shifts at Norish’s store with no drop off in performance levels. In fact, the Flexi LiTHiON’s combination of fully integrated digital motor technology and lithium-ion power is so effective when it comes to eliminating wasted battery charging time and power, that truck availability is typically increased by 25 per cent every day.

John Maguire, managing director of Narrow Aisle Ltd, comments: “Cold storage is one of the most demanding applications for materials handling equipment and Norish has deployed Flexi articulated forklift truck technology across its various business units for many years. The benefits of lithium-ion battery technology for trucks operating within cold stores and the advanced ultra-reliable digital drive technology at the heart of the Flexi LiTHiON made Norish’s decision to deploy Flexi LiTHiON trucks at it’s site an easy one.”