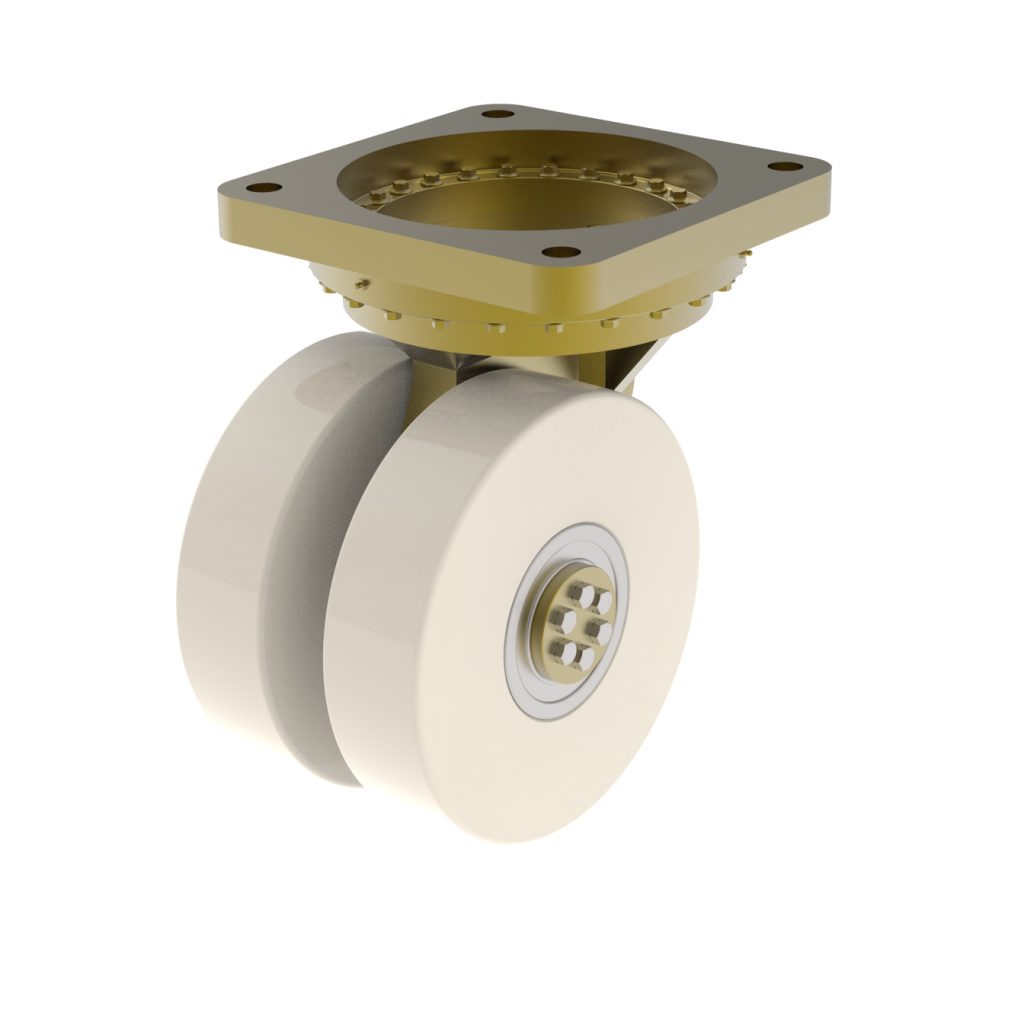 Whether it’s at the airport or in the production hall: special transport platforms are often needed to move extremely heavy loads. The correct underlying components are critical. Robust wheels and castors are necessary to get the “bulky stuff” moving. Blickle offers an extensive portfolio of heavy duty wheels and castors that can handle loads of up to 100 tonnes.

For logistics providers, for example, transporting heavy and bulky goods by air is an interesting business opportunity: the total freight volume at German airports alone has risen steadily in recent years. And there’s no end in sight. For example, according to a report by the news portal Airliners, the Cologne/Bonn Airport plans to almost double its freight volume by 2030. The goal is to increase the volume from 838,000 tonnes in 2017 to 1.5 million tonnes in 2030. So that even heavy goods reach their destination safely, highly-resilient transportation platforms are required with the best possible mobility.

For many sectors, such as the aerospace or mechanical engineering industries, the wheel and castor specialist Blickle, based in Swabian Rosenfeld, offers suitable solutions for heavy duty applications. The standard range includes heavy duty wheels and castors in numerous versions.

A highlight of the product range
A new flagship in heavy duty castors is the welded steel heavy duty double-castor, LSD-GSPO 500K with a load capacity of up to 30 tonnes. It is equipped with heavy duty compressed cast nylon wheels, which offer low rolling and swivel resistance, especially on smooth floors. In addition to its compact design, the heavy duty castor sets itself apart through extremely high rigidity. The swivel head used here is particularly robust and has a four-point swivel bearing.

Typical fields of application for heavy duty wheels and castors include rack feeders and industrial trucks as well as assembly and transport systems. In order to ensure that the transport runs smoothly, without shocks, and that the goods reach their destination without being damaged, spring-loaded castors are also available. These provide excellent spring and damping characteristics and are specially designed for the respective application. To be able to absorb particularly heavy loads, Blickle offers castor versions with multiple wheels. Blickle also has products with load capacities of up to 50 tonnes in its standard range of wheel products. Upon customer request, solutions can be created that are specially tailored to the respective application.

“For heavy duty applications, we continuously encounter the challenge of combining very high load-bearing capacities with a compact design,” reports Thomas Zimmer, head of the heavy duty wheels design department at Blickle. “Our customers attach great importance to a high level of operational comfort. That is why we are seeing the trend moving away from steel and cast wheels and toward wheels with polyurethane tread, which also helps protect the floor surface.”

Safety first
Blickle makes safety a top priority, starting in the development process. Using the finite element method (FEM), the designers simulate the overall behaviour of the final product, taking into account various influencing factors such as the condition of the surface. This allows them to optimise the product for its intended use from the very earliest stages of the development process.

Blickle wheels and castors for heavy duty applications have proven themselves many times over in practice throughout various industries. The sophisticated combination of efficient mass-produced series and highly flexible, small-scale production abilities of the wheel and castor specialist allow it to develop customising solutions for the client in a quick and cost-effective manner.

Heavy duty castors for fine positioning
One example of this are the welded steel Blickle LSD-SETH heavy duty castors, special versions with an extended axle for fine positioning of the tripod jack under the aircraft, used on the HYDRO tripod jack with a capacity of 110 tonnes. As an industry leader, HYDRO has been developing products and projects for the production and maintenance of aircraft and engines for more than 50 years. In the area of ground support equipment, the company’s tripod jacks enable particularly economical and highly-efficient aircraft maintenance, covering the entire spectrum of aviation with a capacity of between two and 210 tonnes. “Our customers tow our tripod jacks over long distances and at high speeds, sometimes over poor surfaces to their place of work,” says Pamela Lanzillotti, Head of Business Unit Ground Support Equipment at HYDRO. “That’s why we were looking for special castors with low rolling resistance and ended up developing a special suitable solution with Blickle.”

In another aerospace application, Blickle’s welded steel heavy duty four-fold castor provided the right solution. A client was looking for a swivel castor with a foot guard for transporting heavy and sensitive aircraft components, one that could also clear away small debris from its path. As the load is shifted manually, low rolling resistance was also important. Blickle developed a welded steel heavy duty castor with a robust swivel head for this application. The relatively low mounting height allowed for high bracket stability. By using four wheels per castor, the load is spread out over a large area for smoother rolling. To achieve low rolling resistance, Blickle used a cast wheel centre with a tread made of the high-quality polyurethane elastomer Blickle Extrathane®, which also protects the floor surface. The castors were equipped with a foot guard to provide protection against injuries caused by wheels or by objects thrown up into the air. A scraper made of polyurethane also pushes smaller items out of the way and thus ensures a smooth, jerk-free ride.