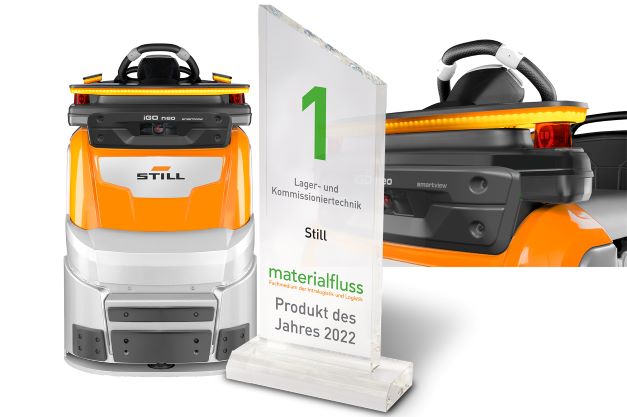 In voting for “Product of the Year”, readers of German trade publication materialfluss have twice opted for products or logistics concepts from the Hamburg-based intralogistics expert STILL.

It was the third time that materialfluss called on its readers to vote for the Product of the Year. The search was on for products and projects that either have a special technical feature, whose market success in 2021 speaks in favour of an award or whose product has a special influence on the industry. Entries were accepted in a total of 14 categories.

STILL GmbH came out on top in the ‘Warehousing and Order Picking Technology’ category as well as ‘Logistics, Logistics Real Estate and Transport’ category, and is one of the top three in these categories, all of which are deemed winners according to the competition’s statutes.

In the warehouse and order-picking technology category, STILL entered the OPX iGo neo autonomous order picker (pictured) with its new intelligent assistance systems such as Easy Protect, which virtually guarantees efficiency and safety.

The STILL OPX iGo neo follows its operator every step of the way and, in autonomous mode, adapts its travel path, speed and stopping positions to the task at hand and its environment. It also brakes automatically at cross aisles and reacts situationally to obstacles and people.

The OPX iGo neo is the first order picker to be equipped with a comprehensive pedestrian protection system (PPE) with safety laser scanners.

A manufacturer-independent intralogistics concept developed by STILL Intralogistics Consulting for Siemens is the second nomination with which the Hamburg-based company took part in the materialfluss reader survey in the logistics, warehouse real estate and transport category and was awarded a prize.

With this concept, the picking performance at Siemens WKC (Chemnitz plant for combination technology) was increased by 150%. To achieve this, an intralogistics area that could not be expanded was modified in the course of the project to accommodate the goods previously stored in another warehouse as well as the picking activities. The challenge was to increase the pallet capacity by 40%, the capacity for small load carriers by 240% and, at the same time, the picking performance by 110%, while maintaining the same floor space.

Another goal of the reorganisation was to install a logistics system on the existing floor space that was tailored to the customers’ needs and at the same time more efficient. To ensure efficient use of space, the STILL experts opted for a high-bay pallet warehouse combined with an AutoStore system.

After joint planning by STILL Consulting and Siemens WKC, the STILL and Dematic sales teams took over. STILL supplied the platform and racking system, while Dematic focused on installing the AutoStore system and the conveyor technology.

The two awards were presented virtually to Frank Müller, Senior Vice President Sales & Service Steering STILL EMEA, on 16th March. “I am delighted to receive these awards. After all, they are awarded by a particularly critical jury – namely the readers of the trade magazine materialfluss,” Müller emphasised in the run-up to the award ceremony.

“I am particularly pleased, however, that the continuing high level of innovation of our STILL employees has been recognised in this way. The readers’ vote shows us very clearly that we are on the right track with our development work and our independent consultancy services. I would like to sincerely thank the readers of materialfluss for this confirmation.”