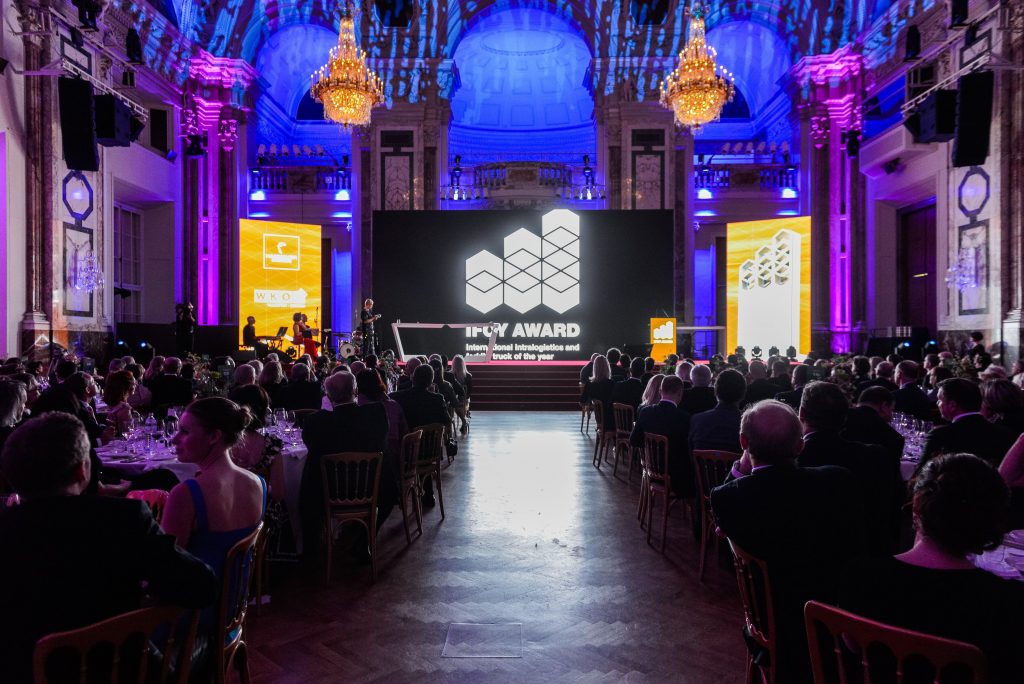 The winners of the International Intralogistics and Forklift Truck of the Year Award (IFOY AWARD) were announced on Friday night at  Vienna’s famous Hofburg. Representatives of Cargometer, Jungheinrich, ProGlove, The Raymond Corporation, Still and UniCarriers Europe received a trophy in front of more than 600 invited guests from business, politics, science and the media. The 29 jurors had nominated 15 solutions and devices in six categories for the seventh round of the worldwide intralogistics competition and voted on the winners after a three-part audit. However, the result remained secret until the IFOY AWARD Night.

The results in detail: In the Intralogistics Software category, a Viennese company won the trophy, much to the delight of local guests. Cargometer GmbH was awarded for its On-the-fly Freight Dimensioning. The 3D object measurement is carried out using cameras installed on the hall doors.

German manufacturer Jungheinrich AG won the award for the most innovative truck in the Warehouse Truck category. Its ETV 216i reach truck is the world’s first reach truck with a fully integrated lithium-ion battery and marks the beginning of a new generation of reach trucks. It convinced the jury not only with its performance, but also with its design. Because the conventional lead-acid battery was replaced by a smaller lithium-ion battery, completely new design possibilities arose for the developers.

US forklift truck specialist The Raymond Corporation was nominated for the IFOY final for the first time. The Raymond Virtual Reality Simulator was the first trophy in the Special of the Year category for the Toyota subsidiary. With the help of virtual reality glasses, forklift drivers can be trained and tested on a real Raymond truck. The solution not only provided a realistic view of the working environment, but also generated data for individual trainings of the forklift drivers.

In the AGV & Intralogistics Robot category, STILL’s LiftRunner tugger train with the LTX 50 tugger and automatic loading and unloading took the honours. In particular, the idea of combining automated driving and automated load transfer was rewarded. The cost-effective and easily scalable solution was simply implemented, but offers the user great benefits, for example in the supply of the production line.

UniCarriers Europe AB took the Counter Balanced Truck category with the TX 3 3-wheel with a load capacity of 1.6 tons. The vehicle from the new TX 3 series scores with its low energy consumption, excellent all-round visibility, comfortable all-electric steering and numerous ergonomic improvements. The most important innovation: a free-swinging, ergonomic armrest, available with either a mini steering wheel familiar from the reach truck segment or a normal steering wheel.

Startup of the Year was won by a Munich-based manufacturer: ProGlove (Workaround GmbH). The young company was awarded for its intelligent glove of the same name for scanning barcodes and 2D codes. It convinced with the development of a powerful scanner of the size of a matchbox, which can be clicked easily on a glove. This means that the operator always has both hands free for work.

Judging decisions are based on the IFOY Audit. The devices and solutions are subjected to individually tailored driving or function tests, including the IFOY Test protocol comprising around 80 criteria and the scientific IFOY Innovation Check. In addition, jurors and their advisory teams from the economy assess the finalists personally before voting. Jurors are urged not to compare the nominees against each other, but against the competing devices on the market in each sector.