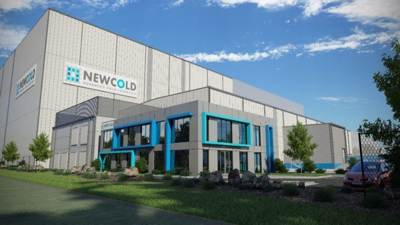 Temperature-controlled company NewCold Advanced Cold Logistics, which opened its first UK automated frozen food coldstore in 2015, is now building two new warehouses in Australia – including a chilled one for the first time.

One of the sites in Truganina, near Melbourne, for frozen goods, will store products for new customer, McCain Foods, Australia along with Peters Ice Cream Australia, part of the Froneri group.

The other site, also based in Truganina, will handle chilled and ambient product for dairy company Fonterra Australia which is consolidating its distribution network and six warehouses into the one facility. Opening in July, the 12-storey site will be capable of holding up to 110,000 pallets.

“The first of its kind in Australia, the facility is highly automated and, because of its technology, we can be more agile and responsive to our customers’ needs, deliver smaller and more frequent orders and importantly, improve our service delivery.”

NewCold is able to handle major automated coldstore projects worldwide having built up experience in Europe where it now has sites in France, Germany and Poland as well as the highly automated, 40m high cold storage plant in Wakefield, UK.

The phase one of the Wakefield warehouse had been completed and phase 2 – to expand the site – will take place next year.

“We have years and years of experience in automation and that gives us the edge over someone who is building an automated warehouse for the first time.”