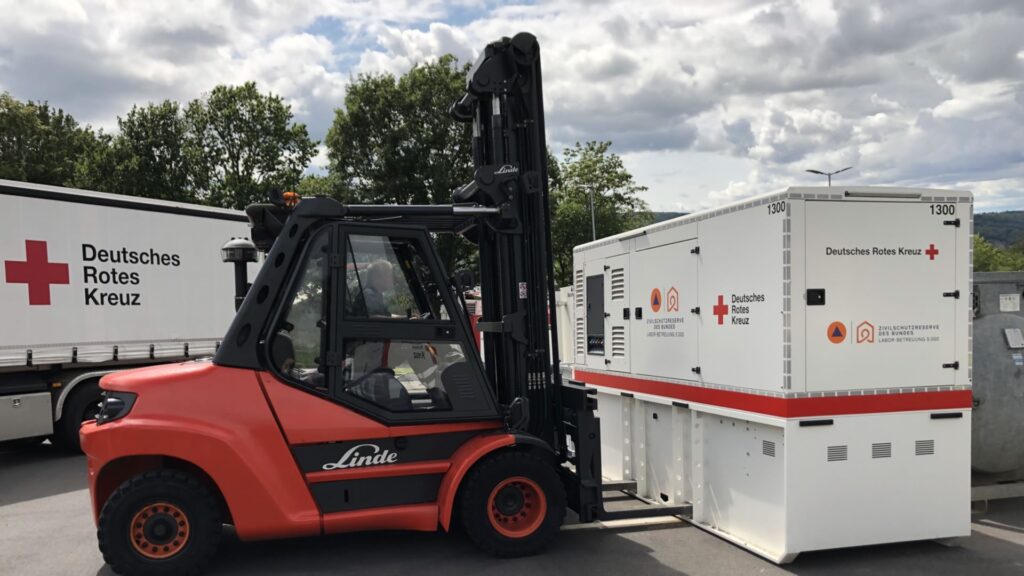 Linde Material Handling is continuing to support reconstruction efforts in central Europe following the devastating floods that struck the region earlier this year.

Even more than three months after the devastating floods that had taken place along the rivers Ahr, Kyll or Erft, many places in this part of western Germany are still a scene of destruction. Back in August, Linde MH and network partner Linde Material Handling Rhein-Ruhr made various forklifts available to the German Red Cross (DRK) for an indefinite period of time – and these are still in use to help transport supplies to those affected and support reconstruction efforts.

“We were shocked by the extent of the damage and wanted to help by way of what we and our network partners can do best: high-performance goods handling,” says Stefan Prokosch, SVP Brand Management at Linde MH. To this end, the company unbureaucratically handed over numerous vehicles to the German Red Cross for their use for an indefinite period of time.

Since then, the forklifts have been used to move many tonnes of loads at various locations, helping to ensure that supplies reach the population and relief workers in addition to supporting clean-up and reconstruction work in the affected areas. In July, the parent company KION Group had already donated €1m in emergency aid to the German Red Cross.

To date, Linde Material Handling and its network partner have delivered more than a dozen industrial trucks to various DRK bases. Most of the equipment – forklifts and warehouse trucks with a load capacity of up to two tonnes – is used at collection points for relief supplies in Euskirchen and Alsdorf. Here, they help by unloading HGVs and transporting materials around the warehouse. “The vehicles were welcomed with great cheers,” reports Mirco Trautewig, who is responsible for marketing at Linde MH Rhein-Ruhr. “Before, there were often only manual pallet trucks available, the use of which required a lot of effort from volunteers.”

A larger diesel forklift with a load capacity of five tonnes is currently in use in the municipality of Grafschaft, district of Ahrweiler at the food distribution point set up there. From this central location, the German Red Cross supplies a total of twelve field kitchens in which up to 29,000 meals are prepared every day and distributed to those in need as well as to volunteers via 42 distribution points. With a load capacity of eight tonnes, the diesel forklift in use at the DRK’s collection and transshipment centre in Koblenz offers even more power.

This vehicle is utilised by Red Cross workers to unload power generators, drying devices and other heavy equipment, which is delivered from all over Germany by truck before being distributed from here to the flood-stricken areas. A team of employees from the Central Service, Truck Finish and Sales Germany departments in Aschaffenburg worked together to ensure that the two forklifts reached the affected region quickly. “Everyone pulled together and was enthusiastic about the project,” says Klaus Reichert, the sales representative responsible for Linde’s forklift pool.

One operation in the flooded area proved to be particularly precarious: A medium-sized company that had stored hazardous materials on its premises suffered the complete destruction of its warehouse and production facilities due to the massive ingress of water. “Only a short time after receiving the emergency call from our sales organisation, we were able to send a suitable explosion protection truck to the site, which has been helping with the clean-up work ever since,” says Marcel Fackert, Managing Director Linde Protected Solutions.