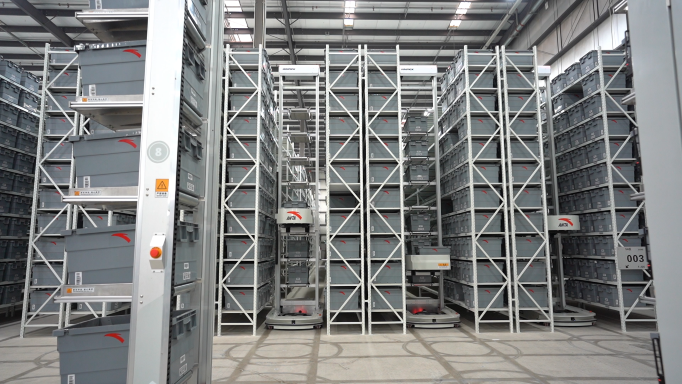 HAI ROBOTICS is working with sportswear giant Anta on a third automated warehouse following the success of two earlier projects. The subscription of the latest project from Anta, together with dozens of projects ongoing in the footwear and apparel market, marks HAI ROBOTICS an established supplier in the sector.

The new project, to be launched in April in Anta’s brand-new warehouse in Foshan, Guangdong Province, will be the third joint-project between the two companies, marking HAI ROBOTICS’ continued success in warehouse automation, in footwear and apparel sector in particular.

Using HAI ROBOTICS’ ACR system, the 9m-high warehouse would reach a much higher storage density to offer up to 30,240 locations, with daily throughput expected to reach 128,000 units.

As an official sponsor of the Beijing Winter Olympics and Paralympics, Anta has seen surging deals, putting warehouse logistics under mounting pressure.

“Anta sees HAI ROBOTICS as an important long-term partner, as we have shared ambition in smart warehousing,” Chen Jiancong, General Manager of logistics of Anta Group, said at the group’s logistics partnership conference, held in its headquarters in Jinjiang, southeast China’s Fujian Province.

Richie Chen, founder and CEO of HAI ROBOTICS, said his company names Anta as one of the top-10 most important global clients, who are entitled to more tailored service. “Together we will keep innovating to address more challenging scenarios for the footwear and apparel warehousing sector and bring more added value to our customers,” Chen said.

HAI ROBOTICS, named a global AI unicorn by Hurun Research Institute in the 2021 ranking, has dozens of ongoing projects for top footwear and apparel brands.

The company was awarded the best strategic supplier by Anta, at Tuesday’s conference, to recognise the efficiency the ACR system has helped to achieve in the supply chain.

With 25 customised HAIPICK robots doing case picking and retrieving from shelves to continuously feed goods-to-person picking stations, storage density of the 5.7m-high warehouse increased significantly to offer up to 27,600 locations. It can handle up to 80,000 units in outbound orders per day.

The warehouse, which was previously stretched tight to handle its tens of thousands of SKUs at low picking accuracy, is now feeding the needs from 1,200 brick-and-mortal stores with a weekly outbound volume of 60,000 pieces.

A larger robot fleet was stationed in its 3,500 sqm warehouse in Jinjiang. With the redesign of 11-layer shelves inside the 5.7m-high warehouse, the project provides around 20,000 storage locations. The warehouse reached a daily outbound capacity of 200,000 pieces with the use of HAIPORT-powered Workstation, an automatic loading and unloading machine.