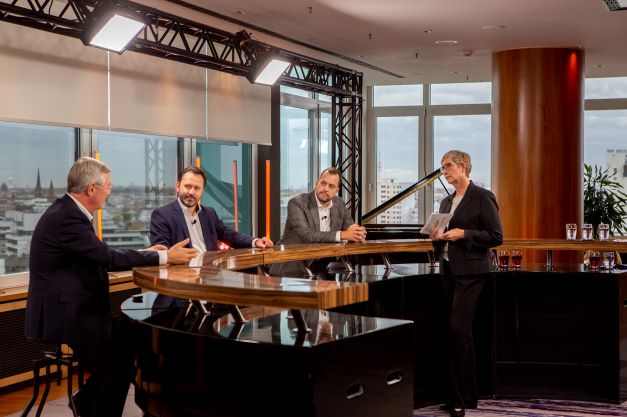 Sustainability and digitalisation – these two topics are currently the most important drivers in logistics. This is the conclusion following the successful premiere of Thesen am Tresen – the STILL Logistics Talk during the German Logistics Congress in Berlin. The Hamburg-based intralogistics company STILL is already planning a continuation of the hybrid talk show format for 2022.

Globalisation, digitalisation, environment, automation and security. Those five trend topics were the focus of 40-minute talks for investment decision-makers and logistics enthusiasts during the 38th edition of the German Logistics Congress (20th-22nd October) organised by the German Logistics Association (BVL) e. V. at the InterContinental Hotel. For this new format, STILL transformed the gourmet restaurant “Hugos” on the 14th floor of the hotel into a recording studio with the Berlin skyline as background. Those who were not present at the logistics summit were able to follow the clips live on the internet hosted by logistics journalists Anita Würmser and Thilo Jörgl.

“We received a very positive response both in the recording studio and in social media,” said Frank Müller, Senior Vice President Brand Management & Sales & Service Steering at STILL EMEA. “The audience was not only thrilled by the fact that renowned experts from business and science candidly analysed the current situation in logistics and defended their theses. The relaxed discussion of pointed theories at the bar also proved to be a highly interesting and entertaining format.”

Among the theses discussed were:

“After the successful premiere of these opinionated talks at television level, we have decided to continue the format. Where we will set up the bar again and which theses we want to discuss will be announced in 2022,” says Müller.

Especially well received were the sessions on digitalisation and automation. Kevin Kufs, CEO at Hermes Fulfilment, underlined the importance of functioning high-performance logistics for the economic success of a CEP service provider. “The end customer does not forgive broken promises,” Kufs emphasised. For this reason, Hermes Fulfilment is planning further investments in digital tools but also in several automated logistics centres here in Germany. The time-consuming preparations are already underway.

“A major obstacle to innovative security concepts based on biometric data is data protection legislation,” stated Ansgar Bergmann, Technology & Innovation – CTR, Project Manager of the CTO at the KION Group. In connection with digital projects, Erik Wirsing, Vice President Global Innovation at DB Schenker, warned that companies underestimate the damage caused by hacker attacks: “Without data security, there is no business anymore these days,” was his thesis.

Jakub Piotrowski, CIO/CDO at BLG Logistics, took up the cudgels for cross-company cooperation in data projects because “digitisation will be expensive and the algorithm will determine success”. In the talk on digitalisation, he appealed to companies to act together on simple software projects for economic reasons. In this context, he referred to the topic of open source, so that not every company pushes ahead with the same elaborate software projects, but instead falls back on already existing, accessible programming. This is why BLG Logistics has also joined the Open Logistics Foundation.

In this context, Prof. Dr. Dr. h. c. Michael ten Hompel, Executive Director of the Fraunhofer IML, referred to the situation in the USA. A large part of the corporate assets generated on the other side of the Atlantic in 2020 were intangible assets, i.e. patents, algorithms and the like. This should be the way to think here in Germany, too. The chances for European companies to lead in the field of material handling in the future are good, according to the scientist.

“Europeans are at the forefront of intralogistics,” said Prof. ten Hompel. In his opinion, more companies should put the two trend topics of swarm intelligence and simulation-based artificial intelligence at the very top of their agendas.

Forging alliances and entering into partnerships – according to contract logistics expert Harald Seifert, this is also the right approach for logistics service providers and shippers to be successful in the future. In the sequence on globalisation, the chairman of the advisory board of Seifert Logistics Group stated that due to supply chain disruptions such as pandemics, strikes or environmental disasters, business-critical items should again be increasingly produced and stored in Europe – even if this is more expensive.

Ralf Düster, board member at Setlog, only partially agreed with him. He predicted that certain sectors, such as the fashion industry, would continue to produce goods largely in Asia. “This is the only way that importers and traders can continue to offer their goods at low prices and remain competitive,” said Düster.

In addition to digitalisation, sustainability will also be a key issue in the global world of tomorrow. This was the tenor of the sequence on environment and climate. All experts agreed that the share of electric forklift trucks sold worldwide will continue to increase.

Nevertheless, Daniel Küster, Supply Chain Director of Warsteiner Group, does not want to immediately phase out forklift trucks with combustion engines from his fleet. For high-performance applications in the beverage industry in day and night operation, he considers his highly developed combustion engines to be more efficient than electric forklifts. However, like the scientist Prof. Dr. Thorsten Schmidt from the Technical University of Dresden, he expects significantly more powerful energy storage systems to come onto the market in the coming years.

These must, however, also remain affordable, says Küster. “We don’t need show cases but use cases,” Küster demanded at the bar. Rolf Beckmann, Director Engineering at Fiege Logistik Stiftung, added that the current development results of new battery types with sodium-ion technology are promising.

Anyone who missed the live streams can watch the recorded sessions HERE.