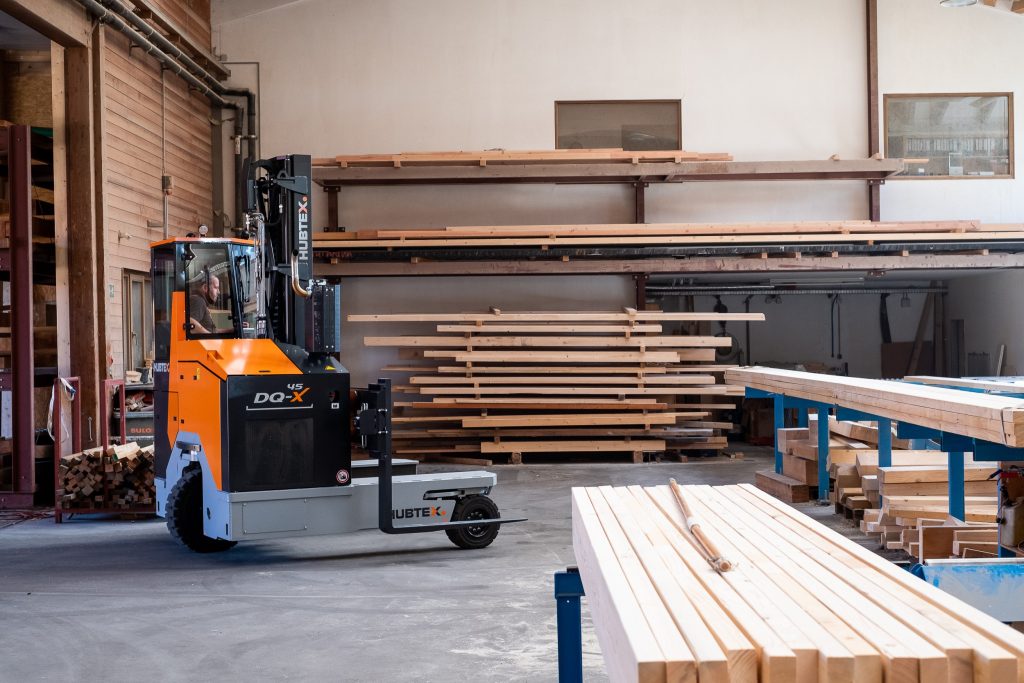 The re-designed DQ 45-X multidirectional sideloader from Hubtex is particularly low in emissions and noise. The core component is the low-noise, low-emissions turbo engine, which maintains impressively low energy consumption thanks to an intelligent vehicle control system. With its all-wheel drive and all-terrain soft tyres, it is the undisputed leader among the multidirectional sideloaders when it comes to outdoor use. Hubtex has further enhanced this truck series to deliver a higher level of comfort in the driver’s cab and easier maintenance.

The DQ 45-X from Hubtex is used as a universal sideloader with a load capacity of up to 4.5 tons. It is ideally suited to handling and transporting long goods and pallets, for example loading and unloading trucks or for use in narrow aisles or block storage. Even on uneven ground, the vehicle functions flawlessly thanks to the all-wheel drive and elastic tires. The four-way steering system from Hubtex can execute a tight turning circle and short switching times from lengthwise to crosswise driving and vice versa. The DQ 45-X also has a stabilisation assistance system for improved manoeuvrability and smooth transport when handling goods: This system prevents unwanted rocking movements during abrupt braking and automatically activates the parking brake when changing direction and when the vehicle is stationary. The system has now been further optimised, particularly with regard to stability during lengthwise driving and cornering.

Turbo engine: maximum performance by improving energy efficiency
Three different driving modes – Eco, Sensitive and Speed – can be selected depending on the job requirements. Low energy consumption ensures that exhaust emissions are further reduced, and fuel consumption is reduced to 4.8 litres per operating hour compared to the 6 litres consumed by the previous model during factory testing. The load sensing system also guarantees an economical driving style. The automatic speed increase function ensures that the hydraulic system is provided with precisely the amount of energy it requires. The core component of the DQ 45-X is the turbo engine with reduced exhaust emissions and noise from Hatz. This engine includes an oxidation catalytic converter and diesel particulate filter that meets the criteria of the EURO Stage 5 and EPA Tier 4 final emissions standards. Emissions have been reduced by up to 30 percent compared to the previous engine. An extremely compact engine with a maximum output of 42 kilowatts is used.

Optimal view of the work area for operators
The exterior of the vehicle has also been given a bit of a make-over. Significant changes to the new generation of the DQ 45-X have been made in the cab area: The previous generation of the DQ-X released in 2016 already boasted an impressive transport and loading process thanks to a highly ergonomic driver’s cab and the best all-round visibility on the market. However, these features have been further improved in the new generation in terms of space, visibility and comfort. The combination of a very robust all-glass door with sash window, free lift mast and compact fork carrier has notably improved the visibility. Less reflections on the window also mean that the operator is less likely to be distracted during his task. In addition, Hubtex has further reduced blind spots when reversing by improving the design of the left rear cab pillar.

The standard version of the DQ 45-X now includes a larger display, which shows the most important operating states and features a touchscreen. The display is now easier to use and can also be used as a monitor for camera attachments. As well as reduced noise levels, the operator now benefits from an optimised heating system. The latest design boasts a recirculation function and insulated pipe connections. As a result, the new generation of the DQ 45-X is even better equipped to withstand the wind and weather during outdoor use.