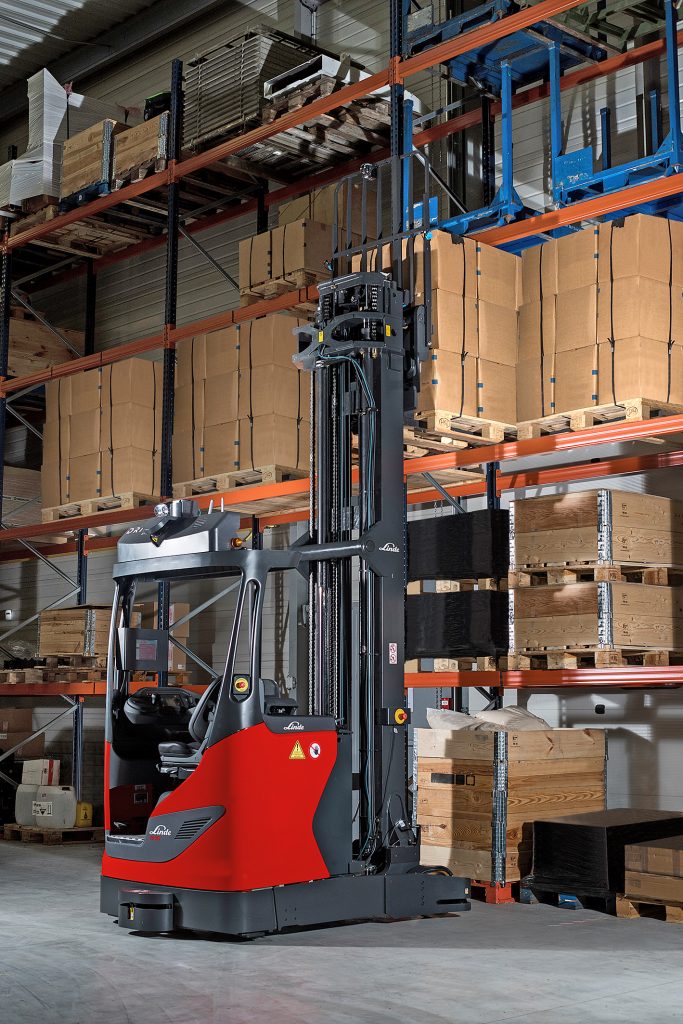 Linde Material Handling is expanding its portfolio of robotic solutions with the addition of the autonomous R-MATIC reach truck. This truck transports palletized goods of up to 1.6 tons fully automatically to high-bay racks, storing and retrieving them independently at lifting heights of up to 10m. Linde says the R-MATIC operates non-stop 24/7 – storing and retrieving goods on and off the shelves as required, and it also takes over the constant supply of workstations. Sensors attached to the truck ensure that pallets are placed or picked up safely and in the right place. A further sensor mounted on the fork carriage prevents the danger of overhanging loads. Three-dimensional cameras are used to detect the storage location on the shelf and adjust the position of the forks using the sideshift.

On the horizontal level, the infrastructure-free contour-based geo navigation system guides the automated guided vehicle safely and route-optimized through the various warehouse areas. A navigation laser permanently scans the surroundings within a 360° radius to orientate itself in space. During this, the R-MATIC moves at a speed of up to 2.5 meters per second.

The use of fully automated equipment is characterized by high reliability, accuracy and safety: The damage rate is reduced to a minimum, since human error can be excluded as the cause of an accident. In addition, the automated processes lead to greater transparency and support operational process optimization. Last but not least, efficiency gains result from the fact that previously required staff can be used elsewhere in the warehouse. “With two or three-shift operation, we assume that the R-MATIC will have paid for itself after two years at the latest,” says Philipp Stephan, Product Manager Linde robotics at Linde Material Handling.

The R-MATIC has been in use for over a year at a well-known international manufacturer of consumer goods. Even during this test phase, supervisors there were full of praise not only for its mature technology but above all for the resulting increase in productivity. “The autonomous reach truck is an option worth considering for any industrial company whose intralogistics system is driven by strong cost pressure and demands for high efficiency,” says Frank Heptner, Senior Director Consultancy and Projects, Intralogistics Solutions at Linde Material Handling. Linde has developed the automated R-MATIC reach truck for transport and warehousing tasks in all sectors. Industrial companies characterized by a high level of automation, such as automobile and commodity manufacturers, particularly favour this truck.