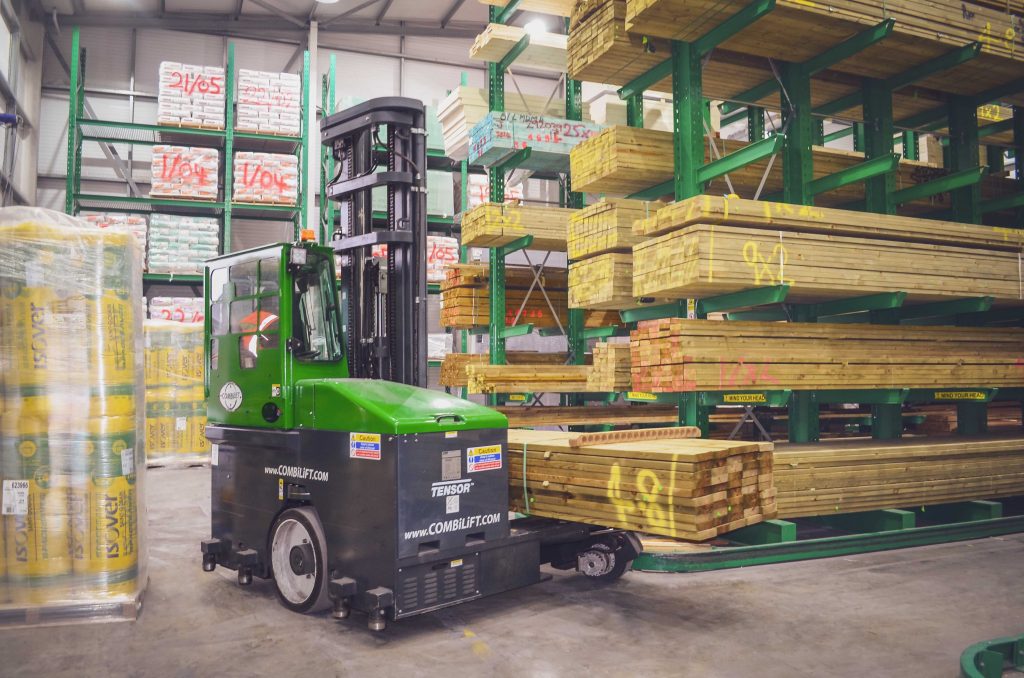 Lawsons Timber was one of the first UK builders’ merchants to spot the potential of Combilift’s multidirectional forklifts when the Irish manufacturer launched its original C4000 truck just over 20 years ago. As Lawsons continued to open more branches, it augmented its fleet and now operates around 35 of these versatile, space saving machines. Its latest deliveries from Combilift are electric trucks, in line with a general move towards electric power in a number of sectors.

Lawsons is the largest family owned independent timber and builders’ merchants in the South East and was established almost a century ago in 1921. It supplies the area with its wide ranging stock which includes fencing, timber, building and sheet materials, insulation and steel fabrication. It also offers services such as timber processing, treatments and grading, and brick matching.

Much has changed since the company’s infancy when horses, carts and manual labour were used for customer deliveries and timber handling. Lawsons now runs a fleet of approximately 100 vehicles from 3.5 tonnes to 32 tonnes from its 17 branches in and around London, including a loft lifter for the efficient high level delivery of loft packages.

John Lawson came across the C4000 at a trade show in 1999 and saw its potential for space saving operation and its ability to replace a combination of counterbalance and sideloader models, which are much less manoeuvrable, particularly when handling long products in tight spaces. The ability to work in greatly reduced aisle widths is also a major benefit for a company whose premises occupy prime land in and around the city.

Group Transport Manager David Harvey explains: “Most of our branches are in built up areas such as Camden, Acton and Wandsworth, where expansion of sites is nigh on impossible – due to cost issues or the density of surrounding buildings. We can only ‘go up not out’ with our storage so packing as much stock into any given area is crucial. Being able to configure aisles widths according to the depth of the Combilifts and going up to racking heights of 7.5 m means we can optimise space and cope with growth.”

Lawsons’ Combilifts, most of which are 4t C4000 models, handle long products such as 6m packs of timber weighing up to around 3t, and are also universal trucks for handling plasterboard, blocks, bricks and palletised loads, within the racking as well as outside. Most recent additions are two C4000Es at the Merton branch and numerous STEs at Whetstone and Camden. “We are keen to keep emissions as low as we can for the good of the environment, and also to keep noise levels to a minimum for our neighbours in residential areas, and these electric models tick all the boxes on both counts. Electric power is definitely the way forward for us and our drivers also like the quiet operation they offer”.

Driver opinion of handling equipment is not to be underrated and Matt Long, who works at the Merton branch, is full of praise for the C4000E. “The guide rollers on the truck together with guided aisle operation make it so much quicker to access the aisles and speed up picking and placing, and there’s no risk of damaging the products either. Once the guys have been trained on the Combilift they never want to drive anything else.”

“Our first Combilifts are still going strong and have thousands of hours on the clock, with just a refurb or so in the interim for some of the original models,” said David, “which is testament to their robust build and long life expectancy. We also like working with the company as the management and engineers are very open to any feedback we have, take it on board for product refinement, so we know we are getting machines 100% fit for the job.”