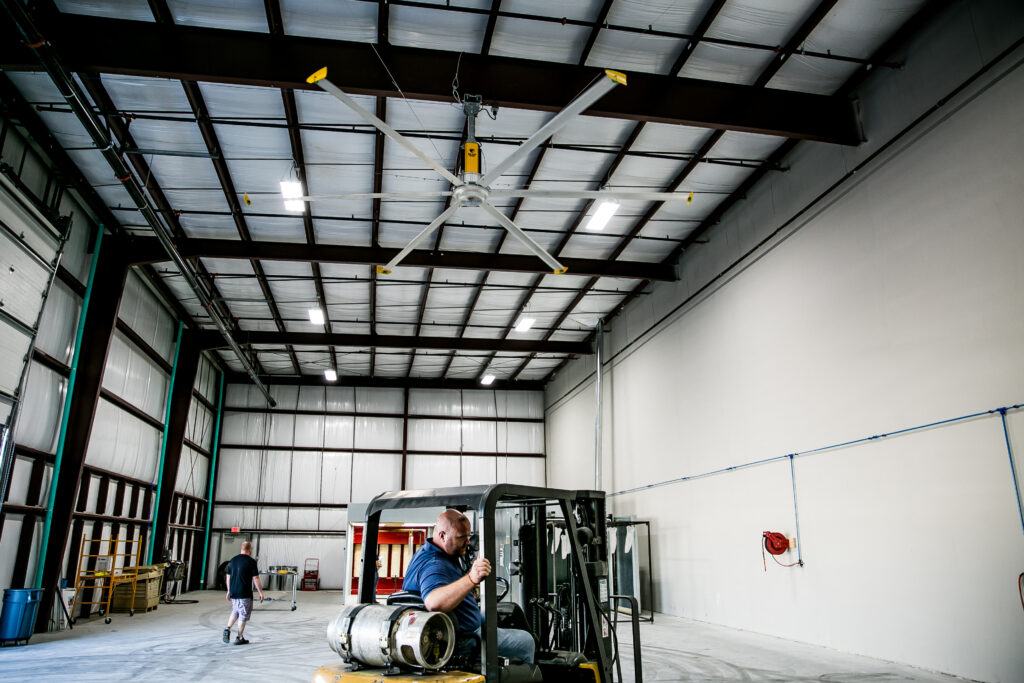 Ions are particles that carry an electrical charge as a result of induced energy to the particle that has caused it to gain an electron, resulting in a negative charge, or to lose an electron, resulting in a positive charge. Ions can exist in all mediums; in the air, they are specifically referred to as positive air ions (PAI) or negative air ions (NAI), depending on their charge. Air ions are able to follow airflows to be distributed but their lifespan (effectively, the time before they find something to stick to) is less than 60 seconds in most environments. This makes it imperative to generate air ions as close to the occupied breathing zone as possible.

Big Ass Fans’ Clean Air System (CAS) products generate ions using needlepoint bi-polar ionization (NBPI) modules. These modules use very little electrical power (less than 1 watt) and are able to generate more ions with elevated air speed across the module needle points, making them a perfect match for integration on the worlds’ best ceiling and directional fans. A further advantage of needlepoint bi-polar ionization is its inherent safety for occupants. No ozone is generated by BAF NBPI products and there are no known negative impacts of occupant exposure to positive or negative air ions – some occupants even report improved mood.

Critically, air ions have a germicidal effect on microbial organisms that are in the air and on surfaces exposed to the ion-rich air. The mechanism of inactivation can be physical, as air ions can cluster to a microbe until its weight is increased to the point where it falls out of the breathable air zone. The mechanism can also be biological, where the surface proteins that microbial pathogens use to bind to target cells are disrupted, preventing the pathogen from infecting other cells. The imparted charge differential of the air ions can also cause a breach in the cell membrane, resulting in oxidation and inactivation of the pathogen’s ability to replicate and further infect new cells.

Using air ions from BAF CAS via these mechanisms has been proven in a third-party laboratory to rapidly reduce the effective concentration of a wide variety of microbes. The ion concentration level present in the target area is also important. Figure 2 shows the response of SARS-CoV-2 in the presence of 10, 40, and 150 thousand air ions per cc. As evident, higher concentrations of ions increase the rates of inactivation, but there is a point of diminishing returns at very high (above 100,000 ions per cc) levels. As such, BAF believes the minimum air ion concentration for a germicidal effect to be around 10,000 ions per cc, with optimal levels being around 40,000 ions per cc. This testing response closely follows the anticipated target theory collision model – that the rate of collisions (inactivations in the context of air ions and pathogens) is proportional to the number of free targets (pathogens) and colliders (air ions) such that inactivation rates are highest initially and increase with larger concentrations of both elements.