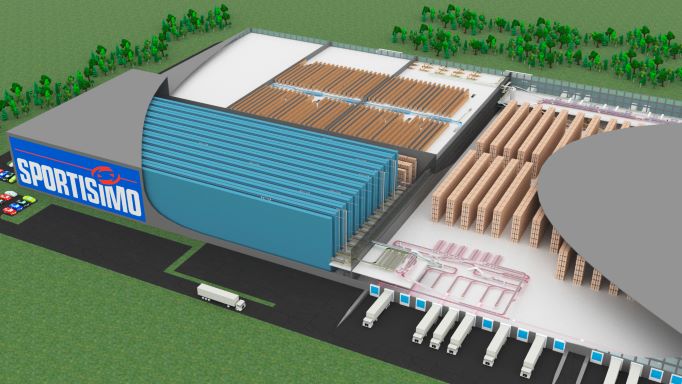 In Sportisimo’s selection process, the intralogistics expertise offered by SSI Schaefer scored points with the sporting goods retailer, and subsequently the contract was awarded to them: Sportisimo’s newly built distribution centre in Hrušov/Ostrava, Czech Republic, will be equipped with an automated intralogistics solution by SSI Schaefer. The hall will be built on brownfield land in Contera Park Ostrava D1. In addition to supplying both branches, the new distribution centre will also supply Sportisimo customers who have placed orders through the online store. The future solution will focus on the automation aspect.

The contract between Sportisimo and SSI Schaefer was signed in May 2021. It is an important project that underscores the development and goals of the sporting goods retailer. Currently, project planning is in full swing, and the construction of the hall has also begun. Operation of the new facility is scheduled to begin in January 2023, which is a record time for such a large and complex project. In the future, Sportisimo will use Contera Park Ostrava D1 to supply both its branches and online customers in the Czech Republic and the surrounding countries of Central and Eastern Europe.

The new logistics solution is designed to ensure maximum warehouse efficiency. “More than 6,000 metres of conveying systems from SSI Schaefer will be installed in Sportisimo’s hall, connecting the different warehouse areas – from depalletising and goods-in to the automated small parts warehouse (ASPW), the picking area and shipping,” explained Marian Gono, Managing Director of SSI Schaefer Systems International in the Czech Republic.

“Along the conveying sections, 150 workstations will be set up where all orders and returns will be consolidated. The ASPW is designed to be 23m high and currently has 11 aisles with a capacity of over 300,000 cartons. It accepts cartons arriving directly from suppliers. The plan for the future is to expand the small parts warehouse by adding more aisles.”

He adds that a four-story pick tower will be built next to the ASPW. It is made up of racks with aisles. A centre aisle will have additional conveying systems as well as workstations for consolidating picked orders. Plus, a large steel platform will be built in the hall, which will be manufactured at the SSI Schaefer Group plant in Hranice na Moravě. This platform will hold the picking stations used to pack orders and prepare them for shipping.

“From the very beginning, we tried to make the transport distances as short as possible when delivering the material prior to assembly,” Gono emphasised. “That is why we are making full use of our production facility in Hranice na Moravě, which significantly reduces our carbon footprint. Not only are we shortening the transport distances, but we are also supporting the Czech economy.”