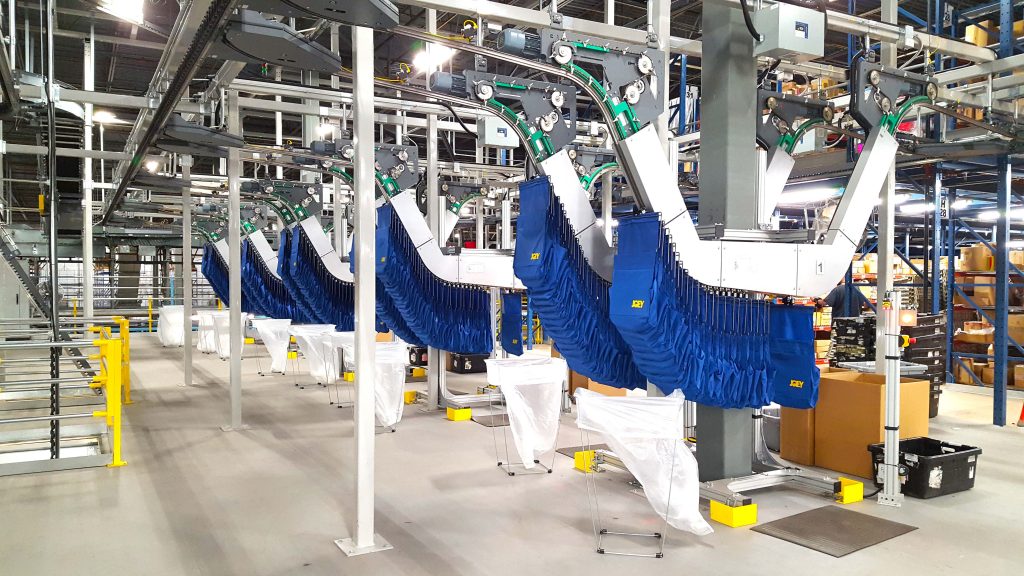 Shuttle or trolley? In everyday parlance, a shuttle is understood to mean a vehicle that plies back and forth – for example, the shuttle buses that ferry passengers between two points. In intra-logistics, ‘shuttle’ is taken to mean autonomously travelling systems with the powerful inbuilt intelligence necessary for highly dynamic warehouse handling. Ferag has a different take on the word when describing the Skyfall hangers that run back and forth around a circuit, with or without stub sections, as ‘shuttles’ – a term that the company uses only for the type that runs on single-axle rollers embedded in the channel. The other, twin-axle type of Skyfall hanger that is found in some applications has been named a ‘trolley’ by the engineers in Hinwil. This is a multifarious term that alludes to such varied means of transport as suitcases on wheels, shopping trolleys, and containers on castors that ply the aisles of passenger airliners. Then there is the trolleybus, or ‘trolley’ in typical American parlance, which draws its electricity through twin poles with their ends slotted into a parallel pair of overhead power lines. This arrangement is actually not too dissimilar from the term as used by Ferag, considering that this design variant of the Skyfall carrier likewise integrates with the channel via a dual suspension.

For transporting loads of more than ten kilogrammes, it is always advisable to consider the trolley model. Its strong point is the ease of handling loads up to 30 kilogrammes, which makes it a natural for the automotive sector and more. For example, one Skyfall trolley can receive and transport up to four dashboard shells or other plastic components at once.

For conveying items under ten kilogrammes, shuttle technology suffices in every case. The principal advantage here: compared to a trolley, a shuttle enables higher storage density since this version requires considerably less room to buffer. Thus, more Skyfall hangers can be buffered in a given space. This is why Ferag offers two versions of the shuttle: the M (medium) variant covers loads up to five kilogrammes, while the L (large) covers the range from five to ten kilogrammes. In certain individual cases, a shuttle can also shift loads in excess of these thresholds, albeit at more modest speeds. Factors such as forks in the channel and curve radii also play an important role here.

Skyfall shuttles are found everywhere in the pocket sorters that Ferag has developed for goods distribution and order fulfilment. But they are also not uncommon in production logistics: for example, they are used in the construction chemicals sector for transporting empty and filled cartridges, as well as for bridging processes with different cycle times.