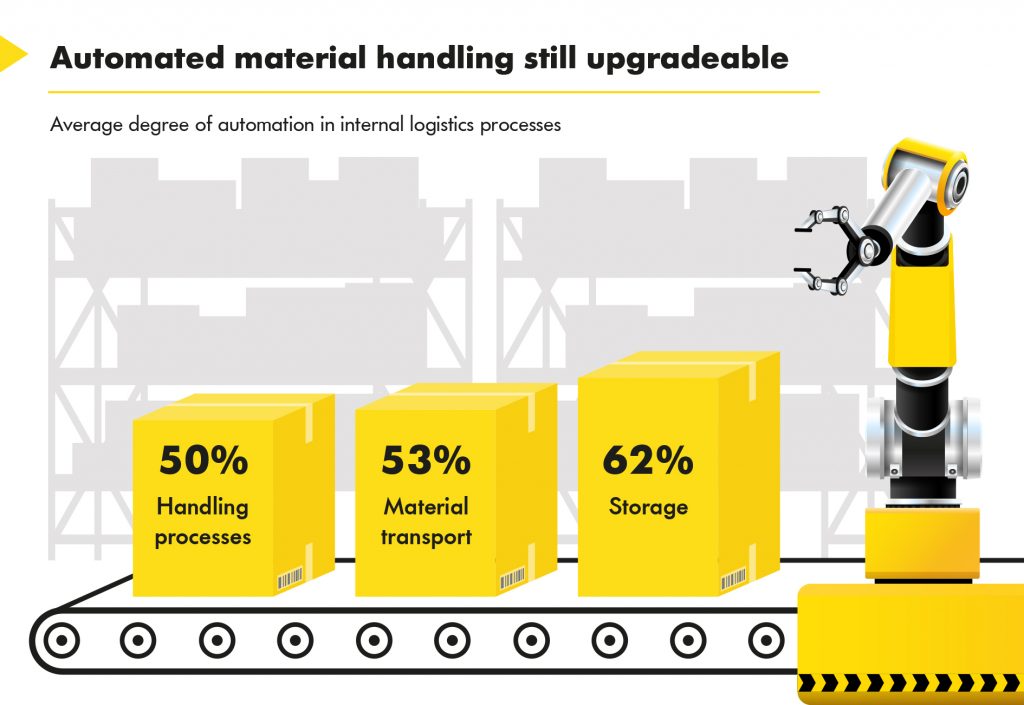 German production companies have an unrealized demand for automated material flow systems, according to a survey by conveying roller and motor specialists Interroll.

There is still a high potential for increasing productivity in medium-sized German manufacturing companies: Not even one in five manufacturing companies in Germany achieves a degree of automation of more than 75 percent in internal material flow. At the same time, end-users attach particular importance to simple and robust systems for pallet handling. These are some of the findings of the Production Logistics in Medium-Sized Businesses survey, which Interroll conducted in Germany in 2019 to identify what users want in terms of appropriate solutions.

Automation and robotics are key technologies for greater competitiveness, quality and sustainability in industrial production. In order to optimally tap the productivity potential of these technologies, the internal flow of materials plays a central role. This applies not only to the supply of materials to assembly lines or robots, but also to the most seamless connection of storage and picking areas with incoming and outgoing goods. Most large companies have recognized this challenge. But what is the actual situation with automation in medium-sized companies?

Interroll’s survey ”Production Logistics in Medium-sized Companies” identifies a clear need to catch up in this area: The average degree of automation of internal material handling at the companies surveyed is only 53 percent. Not even one in five companies (19 percent) achieves a level of automation of over 75 percent for these processes. Nearly one in 10 companies (9 percent) has been very reluctant to invest in these processes and has an automation level of just under 25 percent. In the case of handling processes, this even applies to every fifth company. This situation in the companies suggests that there is a backlog demand for the appropriate equipment. If this reluctance to invest is not broken, these companies are likely to face competitive disadvantages in productivity.

Interestingly, the survey also shows this situation in the susceptibility of warehouse processes to failures, which the respondents reported. For example, the number of companies with a degree of automation of less than 50 percent doubles to 48 percent compared to 24 percent of companies with a higher degree of automation. But even those who automate are naturally not completely safe from disruption. Here, software malfunctions (40 percent) and the incorrect operation of complex systems (32 percent) are among the most frequent causes of impairment.

Simplicity and robustness are particularly important for users

Incidentally, easy operability of conveyor modules also plays an important role for the survey participants in pallet handling. Sixty-one percent of the production planners even consider this feature to be the most important factor in these processes. Across all those surveyed, the durability and robustness of pallet conveyor technology (58 percent) accounts for the decisive advantage of a solution. And those who believe that those responsible in medium-sized companies are not open-minded about future trends are mistaken: 67 percent consider predictive maintenance and professional service to be the most important criterion for ensuring smooth production processes, even before applications with a long service life (53 percent) and modularized products (50 percent).

In the survey commissioned by Interroll and conducted by the agency Faktenkontor (Hamburg), a total of 200 production companies in Germany were surveyed by telephone in 2019.. The focus was on companies with 50 to 500 employees and a turnover of up to 500 million euros. The companies came from a wide range of sectors, including mechanical engineering and the food and consumer goods industry. Technical decision makers, such as technical managers, production managers and production planners were particularly addressed.

With the results of this survey in mind, Interroll is actively working on a new solution – the Smart Pallet Mover, or SPM- to better organize and automate the “last mile” in manufacturing areas.

This new interface will improve the connection between the different phases of the material flow, that is, the movement, organization, input and output of pallets. The SPM can be deployed not only in proximity of manufacturing machines but also between different production cells within the same manufacturing process.