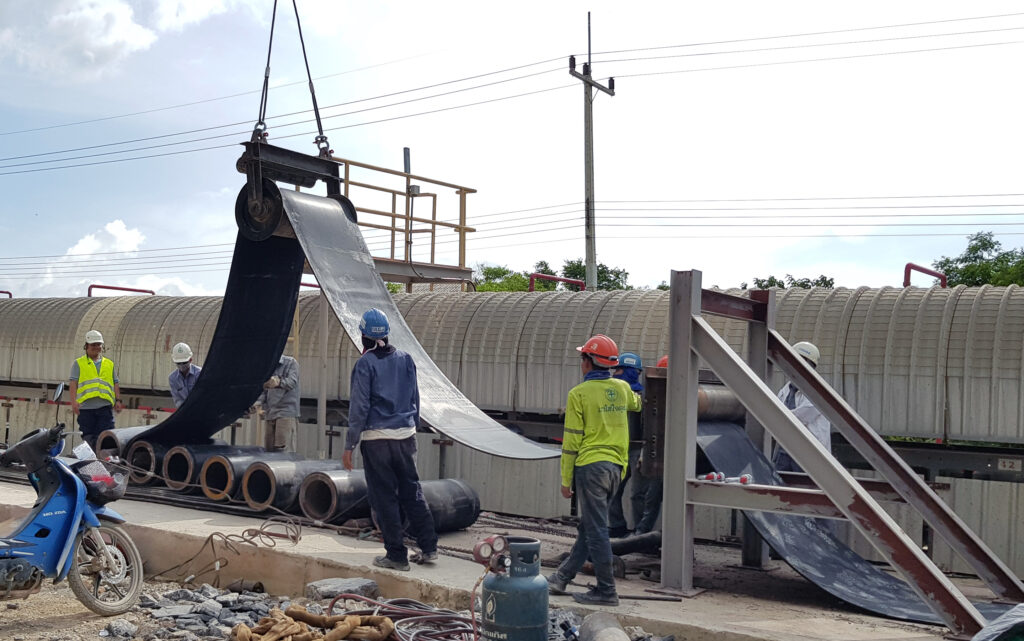 Beumer Group supplied a complex complete system composed of several belt conveyors to one of the leading cement manufacturers in Thailand, for transporting limestone from the quarry to the blending bed. After approx. four years, the belt of the almost 3.5km-long overland conveyor had to be replaced quickly and efficiently.

Instead of exchanging the single belt sections one after the other during long operation stops, Beumer Group relied on a process, that allows the new belt to be inserted into the system and the old belt to be pulled out only in one go. This results in substantial time saving for the customer and avoids unplanned system failures.

The goals for many building materials companies including TPI Polene Public Company Ltd. are being able to compete with the leading cement manufacturers and to position themselves for profitable construction projects. At this regard, the third-largest cement manufacturer in Thailand needs systems that run reliably and can be adapted to the increasing requirements of the market. “TPI commissioned us in 2013 with the installation of a complex conveying system for transporting limestone from the quarry to the blending bed,” says Alexander Unruh, project manager for conveying and loading technology at Beumer Group.

The Beumer team designed an economically complete system made of several belt conveyors. In addition, the system provider supplied a system control (PLC), transfer stations and filter systems as well as foreign material separators. The system is dimensioned for a conveying capacity of 2,200 tonnes per hour. The core of the conveying system for limestone consists of two belt conveyors leading downwards, which are run in regenerative mode and are followed by a troughed belt conveyor with horizontal curves.

In order to remove the material from the blending bed and to feed the primary hopper of the raw mills, Beumer Group supplied further belt conveying systems with an overall length of 989m. The Beumer team was able to build and install all the conveyors in only 11 months. The commissioning phase of three months was followed by the performance tests. Finally, the system provider handed over the complete system to the customer. “That was in 2015, but the project was not yet terminated for Beumer Group,” emphasises Unruh.

The Beumer technicians not only accompanied and supervised the installation and the commissioning. The standard scope of supply also included an intensive training of the operation and maintenance personnel – tasks which are performed by the extensive Beumer customer support team. More than 1,000 employees worldwide now work for this business segment.

“We support our customers from the first project meeting up to the running system, but we also make sure that the system runs safely in the long term,” says Beumer expert Unruh. After four years in continuous operation, the risk of a failure increased due to the replacement state of wear of the belt.

The conventional belt change method would mean for the service technicians to replace the belt by changing every belt section separately. Depending on the belt coil, this could imply eight to 18 belt sections. “Of course this would be very time consuming if the employees perform this work in one go,” says Unruh.

During this time, the complete system is stopped. Therefore, the cement manufacturer suggested to replace the single belt sections gradually, enabling to arrange the downtimes such to affect the working flow as little as possible. Nevertheless, the total downtime of the conveyor would still be very high and the risk of a failure would persist. “A belt change on a conveyor of this length is always critical,” knows Unruh.

Conveyor belt change only in one go

In order to keep downtime to a minimum, the Beumer technicians suggested a new concept that allows them to replace the entire belt at once. “During this process, the single belt coils are joint to form a long belt next to the conveying system and are then connected to the old belt,” explains Unruh. “The existing drive technology and further auxiliary means are used to insert the new belt into the system, while the old one is pulled out at the same time.”

The Beumer technicians examined the conveyor in advance to find a suitable place for the new belt. It is important that the location is directly at the system, that it is easily accessible and that the employees have enough space to prepare the belt, because the connection of the belt ends usually implies their vulcanisation; this requires space for the preparation, but also for the materials required.

“The belt sections were stored outside and protected against UV-rays by a special film. The belt connections were carried out in an air-conditioned tent,” says Unruh. “Why air-conditioned?”, repeats Unruh. Vulcanisation can be made more difficult by environmental conditions such as the nature of the terrain, but above all by the weather. Snow, freeze and ice or rain may imply a forced break for the employees because the process requires not only a lot of heat but also time. I wouldn’t plan a belt change during a Monsoon in India for example.”

Based on the preparations and on their complex experience, the Beumer team was able to estimate the total downtime during the belt change. The work itself was carried out by the service personnel of the customer. The supervisor of the belt supplier was on site to supervise the workmanship.

“If we consider only the costs, the conventional process is less expensive,” describes Beumer expert Unruh. “However, the new process scores with its significantly reduced downtimes.” This makes it profitable exactly when you consider the total cost arising for the customer in case of a downtime – for example, in case of conveying systems with a length of a few kilometres, as at TPI Polene Public Company Ltd. “And as we can change the belt only in one go, the user benefits from considerably higher safety: the risk of unplanned downtime is almost non-existent,” says Unruh.