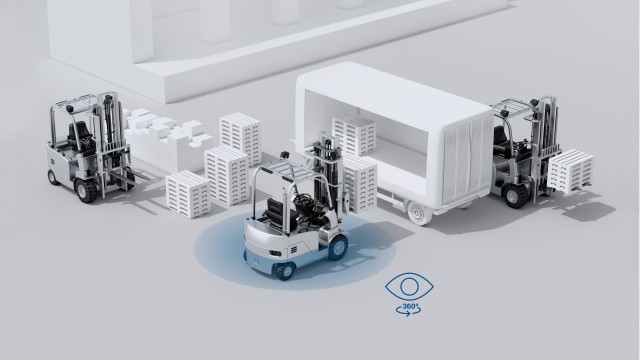 Forklifts and other industrial trucks have become essential work equipment in logistics and warehousing. However, the risks associated with using forklifts are often underestimated. According to data from the German Social Accident Insurance (DGUV), more than 13,500 accidents resulting in personal injury and involving forklift trucks were reported in 2020 alone.

To avoid accidents, the drivers must constantly have the entire area around the forklift in view while driving and manoeuvring. Many drivers are under constant stress, which impairs their performance and often leads to driving errors. This is in addition to health problems from constantly turning their heads while driving backwards.

A new multicamera-based collision warning system from Bosch helps minimise the risk of accidents and reduce stress for drivers by improving the general view around the entire vehicle and actively warning the driver of impending collisions.

“With this system, we are making an important contribution to improving the level of safety when using forklifts and reducing the health-related strains for the drivers,” says Stefan Schenk, who is responsible for the Off-Road operating unit at Robert Bosch GmbH.

The new assistance system comprises four compact near-range cameras and a control unit that creates an all-around view of the vehicle’s surroundings and displays this to the forklift driver on a monitor. Depending on the driver’s current information requirements, different views can be selected and shown on a display in full-screen format or in a split-screen layout. Additionally, the driver can choose from a variety of viewing modes like overlay of the driving trajectory or virtual camera panning.

The visual assistant presented at LogiMAT 2019 already ensures good all-round view even in blind spots, when the driver’s view is blocked by the load on the fork. With the expansion, the system now additionally warns of stationary or moving objects in the vicinity of the vehicle in dangerous situations with a colour marking on the monitor and an audible signal.

To achieve this, three characteristic and particularly dangerous driving scenarios were identified and corresponding use cases for the warning feature were derived. When driving in an aisle or past rows of shelves, the forklift driver is shown anyone kneeling, standing, or moving in front of or alongside the vehicle. If the system detects that a junction is approaching, it switches to intersection mode and additionally warns the driver of people or vehicles approaching from the side. A further benefit of the new assistance system is the warning feature that assists the driver when handling storage items. The detection is then aimed at people moving relative to the vehicle at a distance of 4m.

To enable the system to reliably detect impending collisions and only provide warnings for relevant accidents risks, two analysis methods, object detection and object recognition, are combined. With object detection, the system logic decides whether or not an object is relevant to the collision warning on the basis of characteristic movements. With object recognition, the decision is made based on the shape of the object. To do this, the image of the object is automatically compared to stored image patterns.

“This is done by what are known as neural networks, a software architecture from the field of artificial intelligence, which are trained to recognise specific visual patterns. Merging the two measurement principles ensures that the three situations with a potentially critical accident risk are fully covered by the collision warning and both stationary and moving objects, for example, are detected,” says Schenk.

Bosch launched two versions of the 24V ultrasonic sensor system for near-field monitoring of the working area at the beginning of January. The ultrasonic sensors can be used to secure blind spots, such as a work cage on aerial work platforms. Although both 24V systems feature identical hardware, there are differences when it comes to the processing of the sensor data and thus the functional scope of the different versions.

While the basic system simply measures the distance of a specific obstacle, the high-end solution also features object localisation. Bosch designs assistance systems and functions for industrial trucks, but also for other industrial and off-highway applications, such as construction, agricultural, and municipal vehicles, to be tailor-made for their specific applications.