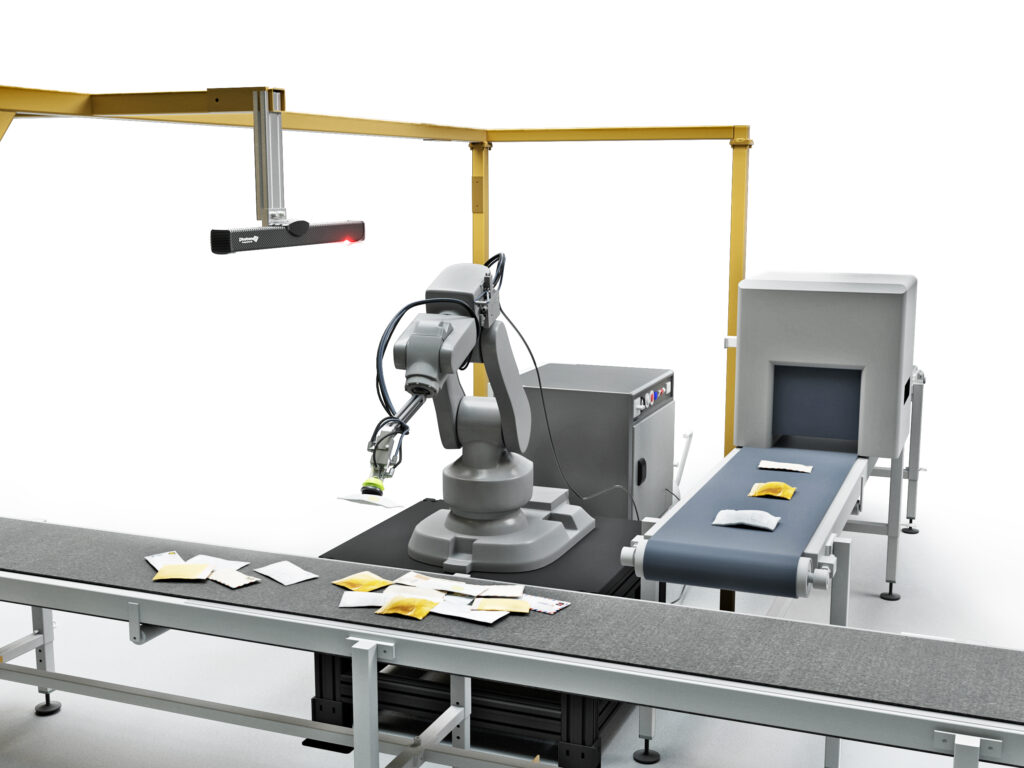 Robots are gradually becoming an integral part of modern processes in logistics and many other industries. Replacing humans with robots for specific tasks brings many benefits – from higher productivity and efficiency to decreased costs and minimised risk of injuries. Freeing employees from repetitive jobs for more valuable, high-impact tasks that require creativity and critical thinking increases their motivation and eagerness, which, in turn, eliminates the risk of human errors.

Automation is certainly the way to go for any forward-looking business – but how to choose from the immense amount of solutions that are available on the market? What makes a solution better or more advanced than others?

For a robot to be able to perform tasks that were done manually before – and to do it as reliably as humans and even better – robots need to “see” and “understand”. That’s the essence of the most advanced high-tech smart solutions that enable businesses to push their processes to the next level of innovation and modernity.

One of the leading companies in the sector of vision-guided, intelligent robotics for industrial applications is Photoneo. The company combines its in-house developed 3D machine vision systems with advanced AI algorithms to provide smart automation solutions for logistics, e-commerce, and other sectors. Photoneo’s automation systems help logistical companies process large volumes of parcels, boxes, and other items by deploying robots equipped with high-end 3D vision and intelligence.

These systems include the Universal Depalletizer for automated unloading of pallets laden with mixed types of boxes and the Singulation and Sorting System for robotic processing of large, unstructured loads of parcels and envelopes.

The basic principle of both systems is that they first scan an entire pile of items, recognize the individual objects in the pile, localise them and decide which one to pick, and then send a command to the robot to perform the picking action. The robot is equipped with a vacuum gripper with a suction cup and can achieve a picking accuracy of ±3mm.

The cycle time is only limited by the speed of the robot. The Universal Depalletizer can generally unload 1,600 boxes in one hour and the Singulation and Sorting System can process 2,500 parcels per hour.

Photoneo equips robots with its industrial-grade PhoXi 3D Scanners, which provide a point cloud resolution of up to 3 million 3D points and an accuracy of 25-500μm across its five models. Each model is suitable for a different scanning range – from 15cm up to 4m.

The scanners provide superior performance even in demanding light conditions, such as brightly lit halls, thanks to the ambient light suppression technology. Their powering versatility allows users to use a single cable to get both electric power and data connection – the Power over Ethernet. Alternatively, the devices can be powered by 24V. Thanks to the IP65 protection rating, PhoXi 3D Scanners are dust-tight and protected against low-pressure jets of water coming from any direction and at any angle.

Besides PhoXi 3D Scanners, which enable robots to “see” 3D scenes that are static, Photoneo also developed a revolutionary technology that enables a high-quality 3D reconstruction of moving objects. The industrial 3D camera named MotionCam-3D enables a snapshot area capture of scenes moving up to 140km/h with a resolution of up to 0,9Mpx (and 2Mpx in the static mode). It’s five models, ranging from S, S+, M, M+ to L, enable the recognition of small packages as well as large boxes coming on a conveyor belt, for instance.

Robotic intelligence and the most advanced approach to object localisation

After a scan is made, it is transferred to a 3D texture dataset to be processed by Photoneo’s AI algorithms. For object segmentation and localisation on the basis of texture and 3D data, the systems use the most advanced approach to object classification and pattern recognition – a convolutional neural network (CNN). Because the network was trained on a large dataset of objects and thanks to its ability to generalise, it can quickly recognise even objects that it has never “seen” before.

Therefore, the parcels and boxes may come in any shape, size, material, colour, texture, position, or orientation. The objects may be irregularly shaped, deformed, placed randomly, and even tilted at an angle. The systems also master challenging surfaces such as black, glossy, or covered with various pictures, patterns, shipping labels, or protruding tapes. The depalletisation solution is even able to easily differentiate gaps between the individual boxes and those between their flaps.

Photoneo systems for automated depalletisation and singulation and sorting of parcels are universal, which enables them to work with any type of boxes or parcels out of the box, without requiring any further training. Another big plus is that the systems are compatible with a wide range of robot models.