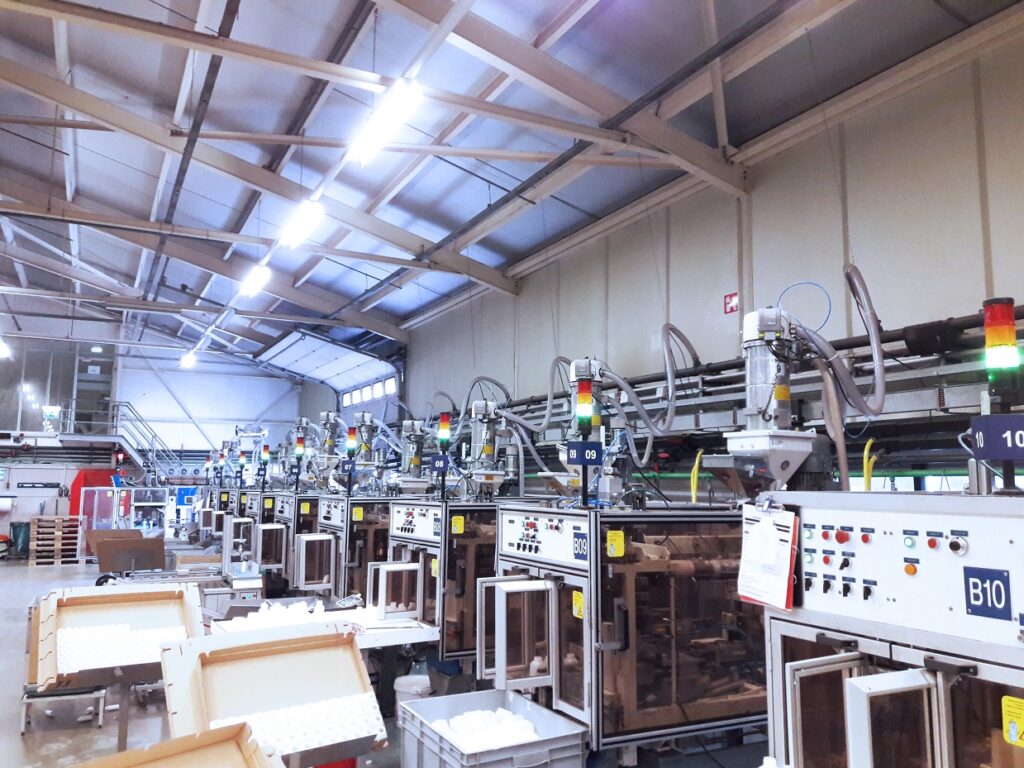 Dutch plastic packaging manufacturer Flestic installed SmartMONITOR from WERMA to optimise its production. WERMA’s solution successfully networked all of its machines, despite their differing ages, sizes and functions.

More than 40 years ago, the history of today’s Flestic company began in the barn of a neighbouring farmer. Here, the founders started with a few small, customised models made of plastic. Just a few years later, the company moved to a larger hall and today the medium-sized company in Dronten, the Netherlands, produces intelligent packaging solutions made of plastic on a production area of more than 7,000 sq m. In addition to bottles, pots and closures, the product range also includes customised plastic packaging.

With over 80 employees, Flestic supplies to a wide range of industries, such as food, cosmetics, automotive, household and care. Complete plastic packaging solutions can be offered, as Flestic’s standard manufacturing processes include injection moulding, extrusion blow moulding and injection blow moulding.

Flestic relied on modern, standardised, but extremely flexible machinery in its production process: The company now has 40 extrusion blow moulding machines, 35 of which were developed and built in-house. The problem with this is that no precise key figures can be determined for capacity utilisation, order status or productivity.

Bas van Nes has worked as a functional safety engineer at Flestic for more than 25 years and describes the problem as follows: “Until now, we could only roughly measure productivity on the basis of the figures we determined ourselves. That was simply not enough for us.”

He continues, “We wanted accurate, reliable metrics and also to see when a machine started and stopped, or what the reason was for that stoppage. This has been a grey area for us so far, but one we were eager to shed light on in the future.”

However, the engineer was not satisfied with the situation at hand and started to gain insight into a pulse of the machine himself. “From this pulse, I was able to build a database and extract information from it,” says van Nes. “But in the long run, this was just not professional enough for us anymore.”

So the company went looking and came across an article about a new machine monitoring and data collection system (MDC system). The “SmartMONITOR” system described there immediately excited van Nes: “What a clever and at the same time simple principle: a signal light that is supplemented with a corresponding module and then immediately sends all the data from the machine to a central database. I was immediately convinced.”

Bas continues: “Our general manager was also very enthusiastic because this way we could see every start and stop of the machines – on the one hand on the screen, but on the other hand also on the machine itself. We have about 40 machines in the factory. Since installing SmartMONITOR, it’s visually clear which machines are running.”

He adds: “We can simply see immediately where there are malfunctions or a breakdown and can therefore react immediately without any time delay.”

The first information and reports about SmartMONITOR excited Flestic so much that they spontaneously attended an information event organised by the wholesaler itsme. Here they came into contact with a company that was already a WERMA customer and had SmartMONITOR in use.

“That gave us peace of mind,” says van Nes. “This recommendation fully convinced us of the efficiency of the system and we decided to initiate the project that very day.”

Then everything went really fast: “I contacted WERMA and just two days later the free test box arrived with everything we needed.” Flestic installed the demo equipment on three machines and was immediately enthusiastic about the results.

In the meantime, Flestic has been using the simple, radio-based and clever MDC system SmartMONITOR from WERMA Signaltechnik for just over a year. The intelligent networking of signal towers provides a simple, cost-effective and retrofittable alternative to conventional complex MDE systems. With SmartMONITOR, faults and unproductive times can be detected, analysed and documented more quickly. This shortens reaction times, avoids downtimes and increases productivity.

The SmartMONITOR system consists of a radio transmitter, radio receiver and the software. The robust and proven radio network (868 MHz) for the production environment intelligently searches itself for the best connection and thus ensures the simplest integration into your production process. The radio transmitter is simply integrated as an additional element into the existing WERMA signal tower using Plug & Play and monitors the status or number of pieces of machines, plants and manual workstations. These states are transmitted by radio to the radio receiver, which seamlessly transfers all data and saves it in a Microsoft SQL database.

With SmartMONITOR, it doesn’t matter what type of machine, age or manufacturer, WERMA’s MDE system only needs a WERMA signal tower as an interface. This was also an important argument for Flestic: “Our machines come from different years of manufacture – we were thrilled how easy it is with SmartMONITOR to nevertheless network them all together.” The customer is also convinced by the wide range of accessories: “Our machines have different sizes, so the signal towers were initially at different heights. Thanks to the clever accessories, we were able to set them all to a uniform height. In this way, their machinery looks sleek and uncluttered.”

The three-level signal columns visually indicate the status of each machine: The red light indicates that the machine is at a standstill, yellow lights up if the temperature difference is too great, and green signals smooth operation. In addition, these are of course transmitted to the SmartMONITOR software. “This provides information about the process stability of the machines,” says van Nes. “And of course we discuss the values every morning at our store floor meeting in production.”

Here, the number of failures per machine is discussed and targeted activities are coordinated. “We were very surprised when we realised that it’s often not technical problems that lead to the stoppages or breakdowns, but organisational reasons behind them.”

Van Nes sees further advantages in the flexibility of the system: “We move our machines from time to time, and so it may be that a machine has to move 10m. Thanks to SmartMONITOR, I don’t have to pull any extra cables because the signal tower is already mounted on the machine. This saves me a lot of work and, of course, money.”

The management also works with the key figures, which are determined from the WERMA database. “In this way, the entire company benefits from this system. Simply great!” concludes van Nes.

Flestic is completely satisfied with WERMA’s simple and clever MDE system. When asked what’s next, van Nes replies, “We want to analyse the data further and refine our key figures.” In addition, the company plans to install a signal light in the canteen as well. “This should immediately inform our employees of a possible machine stoppage, even during breaks. This is the only way they can react immediately.”

In conclusion, he says, “We will equip about another 30 machines with this great system. Because with it, you’re not just limited to production machines, we can network virtually every machine in our company with this system, such as coolers, compressors….I still see a lot of possibilities.”