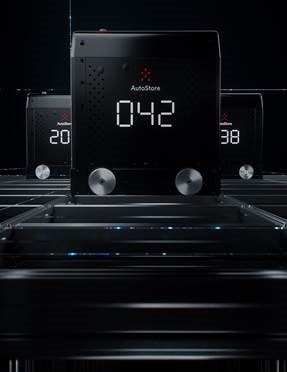 Now, on April 9th at ProMat (8-11 April, McCormick Place, Chicago), AutoStore will unveil its latest-generation robotic cube-based storage system to the North American market – the Black Line. It follows the European debut at LogiMAT in February.

“The Black Line combines the industry’s highest-density cube storage capacity, with exceptionally high-volume throughput, made possible by our brilliant software and a range of smart innovations,” said Karl Johan Lier, CEO and President of AutoStore.”

The Black Line showcases state-of-the-art technology, including newly-designed robots, ports/workstations and bins. It is comprised, fundamentally, of a three-dimensional aluminum grid system of self-supporting bins that are moved to pick stations by independently-operating robots. The number of bins installed is determined by each application’s requirements. The system’s flexibility allows for easy expansion of bins to accommodate growth, and the flexibility to adapt to existing building layouts.

The robots are slimmer and lighter than those used on the Red Line, allowing for tighter robot clusters working within a system. This reduced weight, combined with new direct-drive wheels, enables faster inertia with reduced energy usage. And, new exchangeable BattPackTM Lithium-ion batteries significantly cut robot downtime between recharges.

Each robot has two sets of wheels that enable it to move along perpendicular axes. This makes it possible for all robots to reach any position, and any bin on the grid independently – virtually eliminating the possibility of single-point system failure providing near 100 percent system availability.

When a robot delivers a bin to a pick station, one of three possible port designs are used to get goods out of the grid. This brings the bin out to the operator who can then complete the desired task of picking, putting or cycle counting. The Black Line provides modules designed to meet the needs of high-throughput requirements at a rate up to 650 bins per hour.

At ProMat, AutoStore will have a live demonstration of both Black Line and Red Line systems working in unison on the same grid.