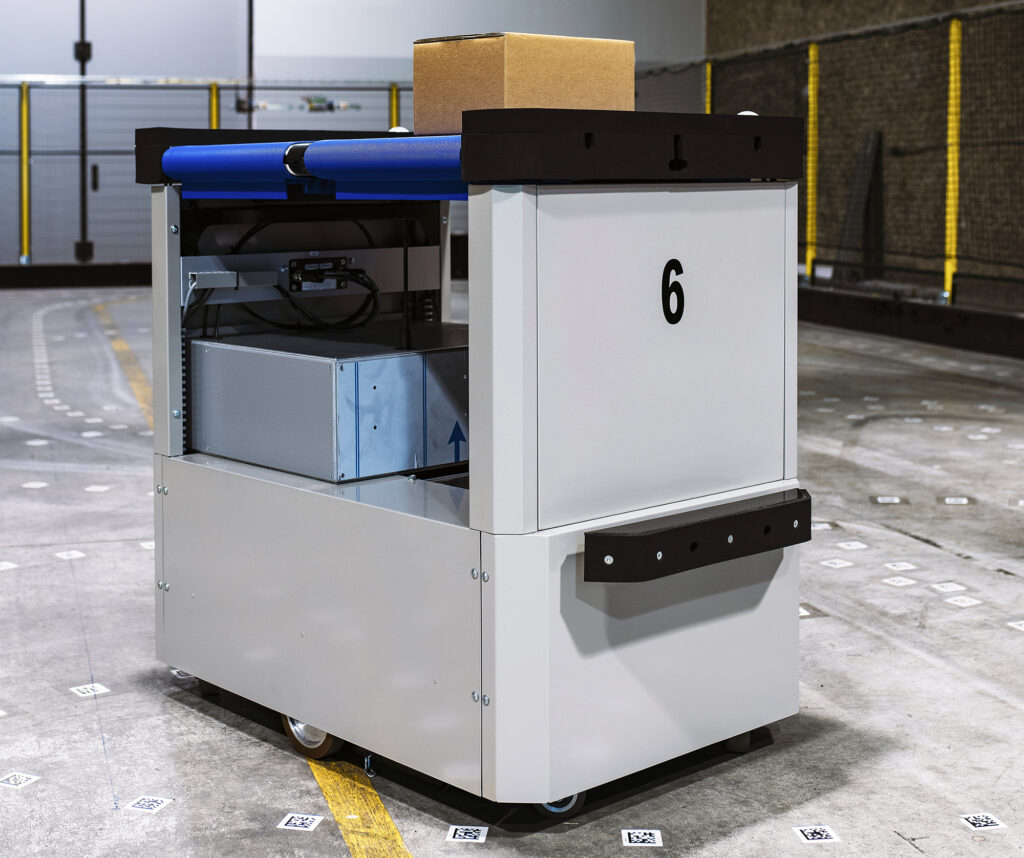 In 2019, the GENI-Ant was showcased at Parcel + Post EXPO in Amsterdam for the first time.

In 2020, the Coronavirus pandemic had a major impact on consumption patterns. The demand for home deliveries reached new record levels and the small parcel volumes increased up to unprecedented peaks.

As a result, distribution centres have been receiving more and more shipments consisting of irregularly sized or poorly packed items that are difficult to handle automatically, such as polybags, padded envelopes and other odd-shaped packages, most of them containing just one small item.

In this context, Fives’ teams worked hard to develop further the GENI-Ant design by integrating specific innovations and improvements

The GENI-Ant incorporates two independent sorting units, each of which can be equipped with different types of belt, depending on the product to be handled.

Beside the flat belt conveyor, Fives included a new belt model specially designed for unstable, fragile items and products with uneven surfaces: this innovative belt features edges and gauges that prevent objects from moving or rolling, offering total control on the item during transportation and sortation.

Different available heights have been added: the robot can be from 800 mm up to 1.3 m high to allow discharging into containers and chutes or onto horizontal conveyor belts, depending on the application.

The fleet runs throughout the operational area at different speeds on the straight and in curves, from 1.5 m/s up to 2.5 m/s.

Differently from the AGVs that are guided by cables, magnetic strips or sensors installed inside the warehouse, every GENI-Ant robots can move completely autonomously in a dynamic environment. Using Wi-Fi communication, the system software manages their navigation, defines where each of them should speed up or slow down and calculates the most efficient travel path, according to the position of the vehicle, the nearest loading area, and the assigned destination.

And above all, AMRs never stop, due to the automatic battery recharging system ensuring continuous operation, with no need to arrange a dedicated charging station.

The main benefits for the customers are:

The initial investment can be adapted according to the current layout and performance requirements and then increased at a later stage, also on a RaaS (Robot as a Service) basis.

“Our AMRs are built to be deployed quickly, thanks to standardised vehicles, proven software modules and seamless integration. The system occupies a very low footprint and is therefore the optimal solution for many applications in both large-sized hubs and small distribution centres, such as post terminals, express courier depots and 3PL warehouses,” concluded Fabio SACCHI, New Application Director at Fives Intralogistics SpA.