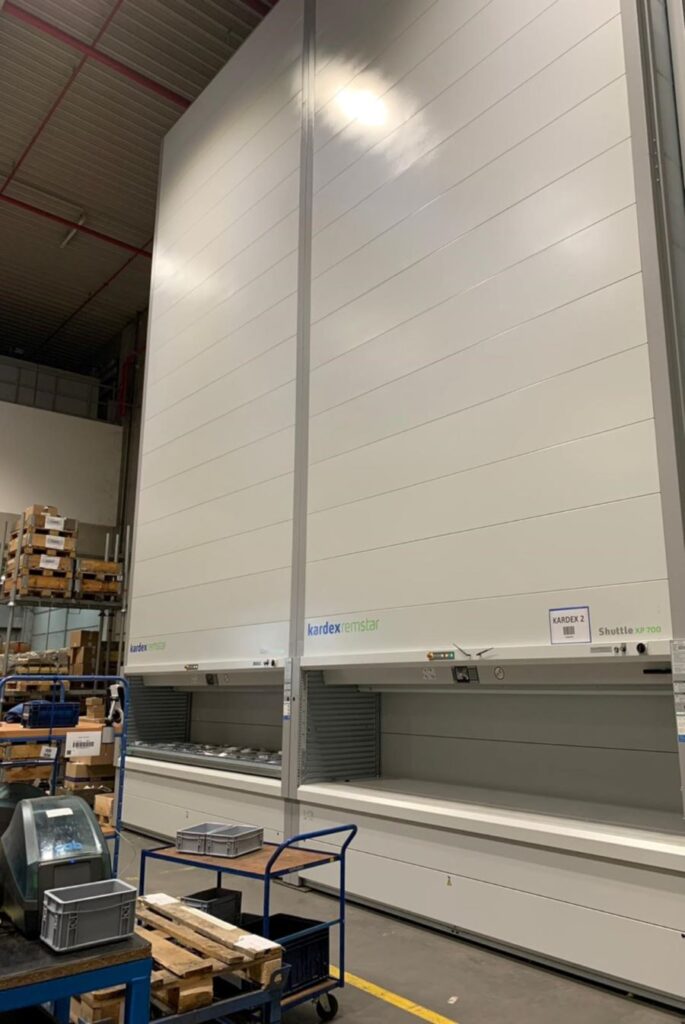 FAUN Umwelttechnik GmbH & Co. KG is one of the leading manufacturers of waste collection vehicles and sweepers in Europe. The medium-sized company operates eleven plants in which around 2,000 employees produce a wide variety of special vehicles. At the company headquarters in Osterholz-Scharmbeck, production takes place on a total of 15 assembly lines, which are supplied with components from an indoor warehouse and an outdoor warehouse. In order to optimise the logistical processes between production and warehouse, FAUN decided to introduce a professional warehouse management system with EPG | LFS. LFS has been in use since October 2020 and already ensured an increase in picking performance at the Kardex towers after a very short time.

From huge steel sheets to tanks and pumps to the smallest screws – FAUN Umwelttechnik requires a wide range of individual parts for the production of waste collection containers. They are kept at the Osterholz-Scharmbeck site on a total of 6,500 square metres of storage space so that the assembly lines can access them at the right moment. In 2019, the company decided to introduce a professional warehouse management system to better organise the items. The new solution should above all bring more transparency with regard to the inventory and warehouse processes – as a basis for subsequently being able to optimise them.

The company researched suitable warehouse management systems with the help of an online tool from the Fraunhofer Institute. During the subsequent discussions with system providers, it quickly became apparent that EPG, with more than 30 years of experience, best met the client’s desire for a professionally positioned provider. FAUN particularly appreciates the modular design of the LFS warehouse management system, which promises plenty of scope for future expansions. Another decisive factor was the innovative training offered by EPG | ACADEMY, which teaches users how to use the system correctly. “We were very pleased with the fast and professional organisation of the online training in the wake of the COVID 19 pandemic,” says Ronny Lößner, who was responsible for the implementation at FAUN Umwelttechnik. “So despite the circumstances there was no delay in our project and we were able to start with LFS as planned.”

Simon Reininghaus, project manager at EPG, praises the constructive cooperation during the implementation: “The project team has excellent process knowledge and was thus able to integrate the processes into the LFS quickly during customising. “ As a result, FAUN was able to record positive effects on employee performance just two weeks after the system was introduced: The picking performance was already higher than before the introduction.

A large part of the increased efficiency was due to the conversion of order picking to multi-order picking. This allows FAUN employees to process several individual orders in parallel. This saves distances and significantly increases the picking performance. “Picking at the four towers used to be our bottleneck,” explains Katharina Beck, Head of Logistics at FAUN. “The employees could only process orders one after the other and had to go from tower to tower. With LFS, it is now possible to combine several individual orders that are intelligently controlled. In this way, the employees manage more orders in the same amount of time.” In order to make the best possible use of this potential, FAUN has installed two new Kardex towers in which the trays can be controlled automatically by telegram exchange and manual input at the panel is no longer necessary.

Beck assumes that performance will continue to increase as FAUN exploits all the possibilities of the warehouse management system. For example, new dashboards will soon be added to make it easier to evaluate key figures. This enables staff to identify weak points in processes and optimisation potential more quickly. In the area of inventory management, transparency has increased significantly: The storage location of individual components can now be determined precisely. In addition, short-term orders from the assembly lines are immediately visible in the system due to the real-time bookings. For the future, FAUN would like to see this transparency in other areas as well. An additional module has already been acquired to map not only the warehouse processes but also the flow of goods between the machine groups. The transport control system is to be implemented as early as next year.